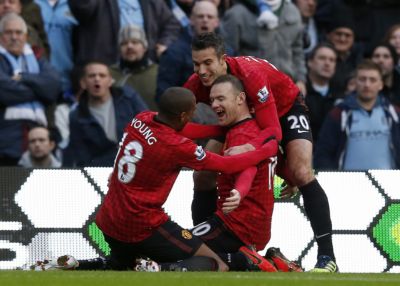 City fought back after Wayne Rooney’s first-half double but goals from Yaya Toure and Pablo Zabaleta proved in vain as Van Persie marked his first Manchester derby with the stoppage-time strike that took United six points clear of City at the top.

West Ham United were haunted by former players as Glen Johnson and Joe Cole scored in Liverpool’s 3-2 victory at Upton Park as the Merseyside club moved into the top half of the table for the first time this season.

United’s victory ended City’s two-year unbeaten home run in the league – a sequence of 37 matches – and inflicted a first league defeat of the season on Roberto Mancini’s side.

It proved extra sweet for United after the sky blue half of Manchester ruled the roost last season, memorably beating United 6-1 at Old Trafford before following up with a home win and going on to win the title for the first time since 1968.

An ugly incident immediately after Van Persie’s winner, when celebrating United defender Rio Ferdinand was left bloodied by a coin thrown from the City fans, threatened to overshadow a rip-roaring advertisement for Premier League football.

“It was disappointing that a supporter ran on the field after Rio had been hit by a coin in the eye,” United manager Alex Ferguson told the club’s website (www.manutd.com).

“It’s a bit disappointing. The game didn’t deserve that. I don’t know whether they’re going to stitch it or not.”

City issued a statement apologising to Ferdinand while the FA also confirmed they will investigate the incident which could have repercussions for the home club.

Ferguson, however, preferred to revel in the positives of his side’s performance which again displayed their ability to outscore opponents even when creaking at the back.

“You couldn’t take your eyes off it today, it was so engrossing. It tells you about the quality of the Premier League; it’s such a great league,” Ferguson, whose side have scored 40 goals and conceded 23 in 16 games, said.

Rooney put United ahead after a 16th-minute counter-attack ended with him scuffing a low shot into the corner.

It was not the sweetest connection but meant the 27-year-old became the youngest player to reach 150 Premier League goals, a feat only managed by Thierry Henry, Alan Shearer, Robbie Fowler, Andy Cole and Frank Lampard.

Rooney made it 2-0 in the 29th minute with a cool finish after fine link-up play between Rafael and Antonio Valencia.

It was clinical by United while City, who had also lost centre back and captain Vincent Kompany to injury, appeared deflated.

With Balotelli stewing in the dressing room, the game suddenly changed in the space of a minute on the hour.

First Ashley Young was wrongly judged offside as he slotted into an empty net after Van Persie’s shot hit the woodwork.

City, instead of being 3-0 down, immediately went down the other end where Tevez showed great composure to set up Toure to fire past David De Gea who had twice made stunning blocks.

Belief flooded back into the City ranks and Zabaleta’s thumping finish made it 2-2 in the 86th minute and even raised home hopes of an unlikely victory.

Van Persie had other ideas, however, and stepped up in stoppage time to fire a free kick past Hart with the aid of a slight deflection off Samir Nasri.

“It’s very hard to lose a derby, but even more so in the last minute so I’m very disappointed, said Mancini.

“But we have the players and the spirit to recover and I believe we will still win the Premier League and FA Cup double.”

Tottenham were close to a fourth consecutive league win that would have cemented their place in the top four when Clint Dempsey opened the scoring at Goodison Park after 76 minutes.

Everton, beaten only twice in the league this season, equalised with a header from their former Tottenham player Steven Pienaar before Jelavic poked home the winner.

Liverpool had to make do without Luis Suarez, their only genuine striker for the trip to West Ham, but proved they can still prosper without the Uruguayan.

Johnson’s piledriver put Liverpool ahead in the 11th minute but West Ham were in front by halftime through a Mark Noble penalty and a Steven Gerrard own goal.

Cole’s composed finish levelled matters after 76 minutes before Jonjo Shelvey, another player who learned his trade at West Ham, went through on goal with 10 minutes left and forced James Collins into the game’s second own goal.