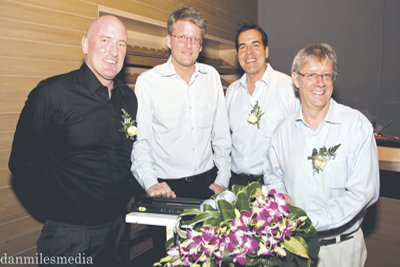 PHUKET: “Caution” was a common theme echoed at the American Chamber of Commerce (AMCHAM) Greater Phuket Chapter’s final meeting of the year, held recently at the Royal Phuket Marina.

The first speaker, Douglas D Mancill, shed light on some of the restrictions and risks associated with Thailand’s Foreign Business Act (FBA). Enacted in 1999, the FBA divides businesses into three categories, he noted.

“The first category comprises businesses that a foreign company simply cannot operate. It is more difficult to obtain a Category Two business license, which requires approval from cabinet. A transport business is an example of a type of business in this category…

“The government is a little more lax in granting category three alien licenses, however,” he said.

Mr Mancill emphasized that the statutes and sanctions of the FBA, “have a lot of teeth”:

“Violations, if imposed in full, can mean up to three years in prison, a million baht fine and a dissolution of the [Thai incorporation of the] business… The Department of Business Development (DBD) has determined that at least 484 businesses have violated the FBA, and are starting to be pro-active and pursue prosecution,” he warned, adding that the Department of Special Investigations (DSI) – the Thai counterpart of the US Federal Bureau Investigations (FBI) – has become more active in monitoring and investigating foreign businesses.

A partner at Bangkok-based law firm, Price Sanond Prabhas & Wynne, Mr Mancill highlighted some of the ambiguities of the FBA, specifically with respect to violations that involve illegal “nominee shareholding”.

Mancill, an American citizen and Thailand expat of 14 years, said that: “The statute that covers this doesn’t use the word ‘nominee’…it refers to aiding and abetting foreigners in operating a business, which is subject to the FBA.”

Mr Mancill went on to explain that legislature in the Kingdom distinguishes between “control” of a company and the actual share ownership. He says the latter is more relevant in the eyes of Thai law.

“What the MoC (Ministry of Commerce) and DBD look at during a registration of a new business is whether the Thai party actually has the ability to purchase their shares. The second thing they look for, is whether the Thai party actually made the investment and paid for the share.They often require a bank statement going back six months for verification.”

Thus, he advised expat business owners, shareholders and/or their respective Thai partners to be especially careful when signing certain documents, which may implicate them in a violation of the FBA.

Moving on to the Treaty of Amity and Commerce, the long-running bilateral agreement between the USA and Thailand, which provides juristic entities [people doing business] from either country certain exception clauses in the other party’s jurisdiction for trade and business.

“I often get asked when this treaty is going to expire… In order for that [the treaty to expire] to happen, either one of the parties – Thailand or the US – would have to give one year’s notice of their intention to cancel the treaty. This has not happened, and thus the treaty is not due to expire.”

The next speaker, Michael Ramirez, a senior consultant for the Tilleke & Gibbins Dispute Resolution Group, shed some light on trends in anti-corruption laws:

“With corruption, most people tend to think about the public-to-private type, but actually a lot of the corruption cases involve the private-to-private sector.”

He pointed out that Thailand was not one of the signatories of the Organization for Economic Cooperation and Development (OECD) Anti-bribery convention in 1999, which had a total 38 signatories, most of which were Western countries.

However, the country was part of the ADB – OECD Anti-Corruption Initiative, 2010, which involved 28 Asia-Pacific nations, who made a commitment to “criminalize bribing of foreign officials” and “sanction businesses involved in bribery.”

Nonetheless, Michael said that there is gradual progress taking place in curbing corruption in Thailand in respect to the enactment and enforcement of laws.

Finally, Olaf Duensing, co-founder of the legal advisory and services firm Duensing Kippen Ltd, highlighted the importance of including an arbitration clause in business contracts.

Licensed to practice law in Germany and a member of the Chartered Institute of Arbitrators (MCIArb), he has worked as a legal consultant in Thailand for 11 years. Olaf said that it is important to include various details in this clause.

“In addition to the arbitrators, who must be independent and impartial, it is also important to identify the jurisdiction and language that the arbitration will be conducted [in],” he said.

“All parties must agree to the arbitration clause. It cannot be enforced if all parties did not sign to it. However, once signed, you can not back out,” he said.

One important point he made is that parties involved should review and consider any and all relevant laws in the respective jurisdiction, which might impact the award or enforcement of an arbitration decision.

Phuket Finance: Bonding with your portfolio