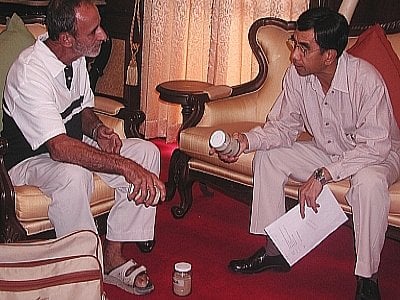 PHUKET: As sailors raced in the final day of the Phuket King’s Cup Regatta that concluded yesterday, one of Phuket’s longest-staying expats and best-known personalities in the local yachting community, Stafford Steer from Australia, died after a brief battle with cancer.

Stafford arrived in Phuket from Cairns, in Far North Queensland, Australia, in 1992 on board the sailing catamaran No Fixed Address, which he and fellow Phuket sailing icon Mark Pescott built together.

Stafford went on to win the Mulithull class in the Phuket King’s Cup Regatta that same year.

He is also likely the only expat sailor in Phuket to have a sailing hazard colloquially named after him, a semi-submarine rock off Cape Panwa that Stafford ran aground on with No Fixed Address years ago.

The event became local sailing legend and a photo marking the occasion for years was on proud display on the “Wall of Fame” at Jimmy’s Lighthouse by the shores of Chalong Bay.

Stafford is well-known for running the Mike’s Bikes visa run company for years before embarking on a venture to establish the Phuket Sport & Tennis Club in Rawai.

Brent Mcinnes of the Phuket Cruising Yacht Club marked on the club’s Facebook page today: “Stafford, not one to leave anything half done, married Pat in the last week of his life after living together for more than 16 years.

“Stafford was a man you could depend on for support when the chips were down. He didn’t suffer fools well. He completed all tasks he took on and was a good source for advice on many levels.

“He is survived by his wife Pat and a son and daughter in Australia. Stafford was 71 years old.

“You now have time to rest, Stafford.”