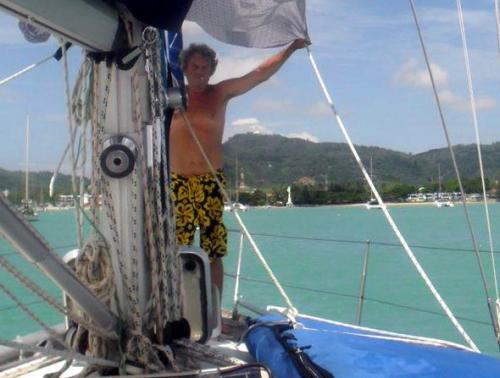 Mr Spraggs, 59, was re-anchoring his boat La Zingara at about 5am after an overnight storm had pushed another boat too close to his, Capt Chianchai Duangsuwan of the Chalong Police reported.

Mr Spraggs was trying to push the boats apart when he fell overboard. He struck his head on the other boat and fell into the water, the Phuket Gazette was told.

“A friend from New Zealand who was on board raised the alarm, shouting to get the attention of other yachties on liveaboards at the Chalong anchorage, on the north side of Chalong Pier,” one local yachtie told the Gazette.

“They started a search, and found his body about 30 minutes later. They attempted to resuscitate him and took him to Chalong Pier, where an ambulance was waiting, but he was pronounced dead [at the scene],” he said.

Mr Spraggs was well known among sailors at the Phuket Cruising Yacht Club.

“He was a nice, happy fellow,” one PCYC regular told the Gazette. “He was a happy soul – happy to be retired, happy to live in Phuket. He got along with everybody.”

Mr Spragg’s family and the New Zealand Embassy in Bangkok have been notified of the incident.

Mr Spraggs is survived by his partner Shirley, daughter Stevie and his aging father.