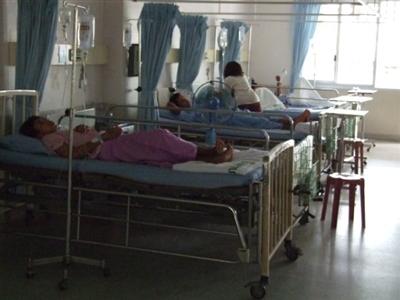 PHUKET: Some 120 students from Prachanukroh 36 School in Kamala were treated for food poisoning at the local public health clinic on Sunday.

Instructors and school officials rushed the students to the nearby Kamala Public Health Clinic, but overwhelmed staff there transferred the group to the better equipped Patong Hospital.

Twenty-five of the ill-at-ease group were admitted for immediate treatment and 28 more kept in for observation. The rest were allowed to leave.

The students, of both sexes, were all boarders at the school.

Afterwards many began suffering attacks of vomiting and diarrhea. These continued into the next day, at which time school officials led them en-masse for treatment.

Patong Hospital deputy director Dr Atundre Lamsagun said: “Those most gravely afflicted are largely from the girls’ dormitory. Teachers gave them medicine during the night, but the conditions of many worsened until this afternoon when they were brought to hospital.”

A medical team was sent to inspect the dormitories, the bathrooms of which passed inspection.

In the dormitory inspectors found wet and dry instant noodles as well as fresh tamarind that some of the girls had eaten, but it is not known with certainty what caused the food poisoning outbreak.

Phuket to get first “Health Promoting Hospital’ in Thailand