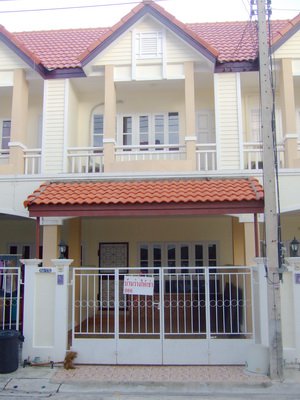 PHUKET: Neighbors of confessed murderer Ronald Finelli said he and his family kept to themselves and didn’t have close relations with anyone in the residential estate where they lived for about one year prior to his sudden disappearance.

The killing of 33-year-old bar hostess Wanphen Pienjai occurred at a two-story townhouse in the recently-built Tantong Villas estate, opposite the entrance to Phuket Villa California on Chao Fa East Rd.

The neighborhood is neat, prosperous and modern, with well-paved walks, trees and places for recreation – the type of estate conformable to the tastes of Phuket’s rising middle class.

Finelli and his family lived on a small dead-end soi – containing perhaps twenty homes in all – five blocks past the guarded entrance.

The house where he lived is up for rent. His former landlord, Urai Jantorn, said that Finelli had lived in the house one year.

“His wife contacted me about renting the house. My dealings were always with her, because of language. They led normal lives as far as I could see; I didn’t really know them,” she said.

Yet, one thing the couple did was strange, especially for people in tough financial circumstances who might need to recover their rental deposit: “They failed to give notice before moving out,” said K Urai. “I didn’t know they’d moved until a Thai friend called to notify me that the police came to investigate,” she said.

Neighbors said the confessed killer was rarely in evidence. No one in the neighborhood knew him. He had no rowdy parties, no big fights, no traffic of friends or visitors.

“His wife often took the baby out for a walk in the stroller,” said a fruit vendor living on the soi. “She had a stout older sister or friend who came to visit. We’d often see them talking as they strolled with the baby, an infant boy,” she said.

Ms Wanphen’s murder happened after Finelli’s wife returned to her home in the northeastern province of Mahasarakham, taking the couple’s young child with her and leaving the American alone and in dire financial circumstances, police said at a press conference earlier today.