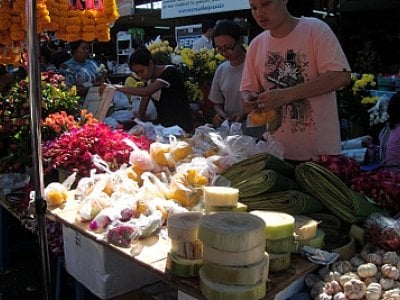 PHUKET: Floods in Bangkok and Central Thailand forcing the prices of some flowers to double in Phuket have not stopped people from splashing out for the Loy Krathong festival tonight.

The krathong, lotus-shaped floats traditionally made of banana leaves, with a small offering of food, flowers, joss sticks and/or candles, are usually adorned with lotus and orchids.

Prices of both these flowers have risen dramatically in the past few weeks, said Jitra Arunkijtaweerat, a flower vendor at Kaset Market, located behind the Robinson department store in Phuket Town.

“Lotus flowers used to be 6 baht each, now they’re 12 baht each. And orchids now cost 5 baht more than they used to,” she said.

Regardless, Ms Jitra said she expects huge turnouts at the Loy Krathong events to be held throughout Phuket tonight.

“I think Loy Krathong will be very busy this year. I have sold many, many banana leaves and stalks used for making the krathong,” she said.

She added that many shoppers have turned to cheaper flowers, such as marigolds, to decorate their krathong.

“The prices of some flowers have not changed, and people are snapping these up. Last year we sold about 30,000 marigolds, but this year I have sold 70,000 flowers already,” she said earlier today.

Fellow flower vendor Somsri Tantisamarak said this year many people were using all-natural materials to make their krathong, instead of Styrofoam and other synthetic materials.

“There will be a stronger police presence, including Tourist Police volunteers, at Loy Krathong events this year. Officers will mainly be present to deter any bag snatchers or any other common thieves from taking advantage of tourists,” he said.

“We will also have officers on duty to direct traffic, which will be busy tonight. More and more tourists are arriving on the island as we enter the [tourism] high season,” he added.