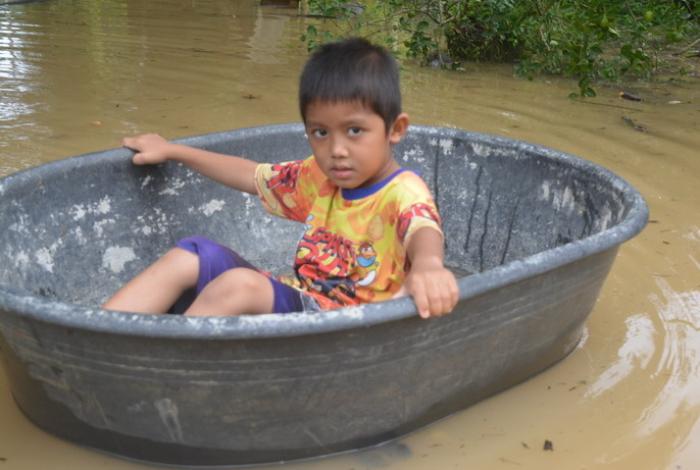 KRABI: Flood and landslide warnings have been issued for Krabi residents after downpours affected at least 50 people over the weekend.

On Monday, Klonghin OrBorTor President Sila Saiyid inspected an area where about 20 houses have been flooded at Baan Tung Kor, in addition to 400-500 rai of palm and rubber plantations.

“Heavy rains caused excess water to collect in the area,” said Mr Sila. “We have temporarily provided boats for locals to commute in, but our long-term plan is to dig a canal.”

The road leading into the area was cut off, and some houses were inundated with meter-high floodwater.

An area in Kaokram subdistrict was also badly affected by the floods. Local government officers visited the site to calculate the damage and plan solutions.

“More than one hundred meters of road was submerged in the area. We have installed warning signs for drivers of small vehicles,” confirmed Thalerngsak Phuwayanpong from the Department of Disaster Prevention and Mitigation (DDPM) in Krabi.

Mr Thalerngsak added that residents in all eight districts of Krabi Province have been issued warnings in addition to one regarding Phanom Bencha mountain for landslides, flash floods and fallen trees.

Last month, villagers in Ao Luek District were hit with floods that submerged more than 300 meters of roads in the area. DDPM officers handed out boats to locals and promised to build a dam as a long-term solution (story here).