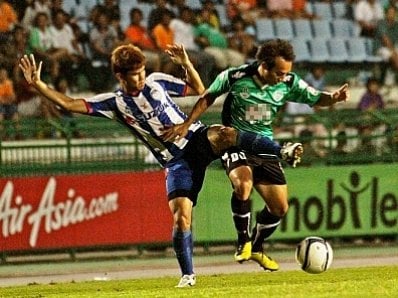 PHUKET: A 93rd minute strike from Kone Adama sealed victory for FC Phuket in the return leg of their Toyota Cup last 16 round match against Thai Premier League side Sri Racha last night.

After a 1-1 draw at Surakul Stadium on July 6, Phuket traveled to Chonburi knowing victory was their only option and that Sri Racha only needed a scoreless draw to advance.

Unlike the football cliche, this was a game of ‘one half’ with all five goals coming in after the break.

Kone Adama opened the scoring fest on 47 minutes, and it looked as if Phuket had clinched an unexpected win four minutes later when Seksit Srisai added a second.

Phuket’s two vital away goals meant that Sri Racha needed to score at least three without reply in 35 minutes if they were to continue their cup campaign.

Pornsak Pongtong gave the home side hope, scoring on 76 minutes. In the 85th minute, Aaron Da Silva scored the equalizer and put both sets of supporters on the edge of their seats for the last 10 minutes.

A frantic Sri Racha pushed for a winner before extra-time while Phuket slowed the tempo and hoped for a mistake or a chance to counter.

The error came in injury-time when Kone Adama stole the ball from Sri Racha defender, Diego Robert and gave goalkeeper, Lucas Daniel no chance with his strike.

Phuket now advance to the last eight after a stunning 3-2 result on the night and 4-3 on aggregate.

Coach Sompong Wattana was delighted with the win and felt confident that if they kept this form, they have the ability to beat any team in the Thai League.