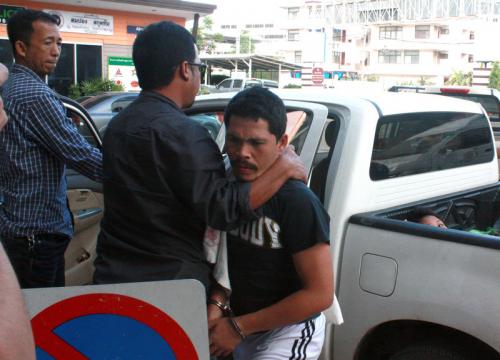 PHUKET: All five suspects accused of carrying out an attack on a Kedah royal family bodyguard at a high-end resort in Patong just after midnight on Tuesday (story here) arrived at Patong Police Station for questioning this morning.

Joining them were two Malaysians named as The Lai Chay and Hing Yam Shiong.

All five remained silent as they were escorted into the police station.

Case investigator Lt Thawatchai Srimai declined to comment, citing his superintendent as the only officer authorized to comment on the case.

Patong Police Superintendent Chiraphat Pochanaphan was brief in his explanation.

“We’re still investigating the case,” was all he said.