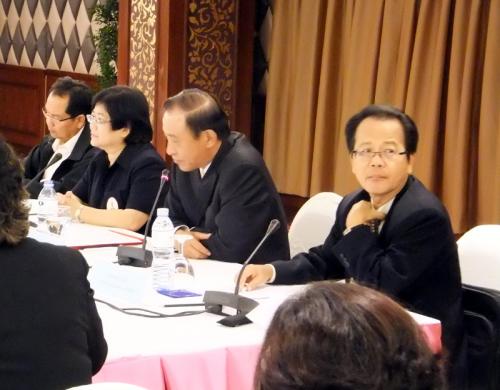 PHUKET: The Deputy General Director of Tourism has vowed to hire Chinese translators for Phuket police stations in reaction to concerns raised by Chinese Ambassador to Thailand His Excellency Guan Mu on Wednesday.

“We will hire police translators to work with the police,” Deputy General Director of Tourism Kajorn Weerajai said. “I also plan to make a guide book for Chinese tourists and improve the efficiency of the tourist police call center.”

The way Chinese tourists were handled by local police was only one of the many issues outlined by Amb Mu at a conference on Wednesday.

In total the Ambassador brought up six problems concerning facilities, corruption, and safety and proposed suggestions that had the support of Phuket Vice Governor Sommai Prijasilpa, who co-chaired the conference.

“About 4 million Chinese tourists are forecast to visit Thailand this year and our goal is to help them feel more comfortable while they are here,” said Amb Mu.

“In high season, there are not enough hotel rooms or transportation and not enough guides who can speak Chinese,” he said (story here).

He suggested allowing Chinese people to be guides and increasing the number of hotel rooms, as well as buses for tour groups, as some tourists had complained of having to wait three hours for their tour bus.

The scamming issues highlighted by the ambassador included jet-ski operators who overcharge for repairs and agencies who sell “Zero baht tour packages” at prices so low that hotels have refused to allow these pre-paid guests to check in.

The ambassador also spoke frankly about police corruption, noting two problems: police extortion of money from tourists and an investigative system so slow that cases are rarely resolved, and suggested that police training needed improvement.

To help keep Chinese tourists safe, and reduce the number of drownings and traffic accidents, he asked for more warning signs and tourist information in Chinese. He also requested that the Thai government help tourists understand Thai law and culture via Chinese language materials.

A conference participant told the group that the warning leaflet distributed by Patong police in English, Chinese and Russian used Google translate to provide the Chinese language version, which had not been accurate or intelligible.

She noted that Chinese tourists in Phuket numbered over 570,000 in 2012 and that the first quarter of 2013 showed a nearly 50 per cent increase over the same period last year

“We see the importance of developing our facilities and security to support the growing numbers of Chinese tourists,” V/Gov Sommai said.

Other Thai officials promised to help find solutions to the problems presented by the ambassador.

To solve the transportation problem he said, “I have talked to the minister of transport about reducing taxes on buses; that will help business owners to buy new buses to service customers.”

“I promise that I will do my best to take care of Chinese tourists in Thailand,” added Sansern Ngaorangsi, Deputy Governor for International Marketing (Asia and South Pacific), Tourism Authority of Thailand.