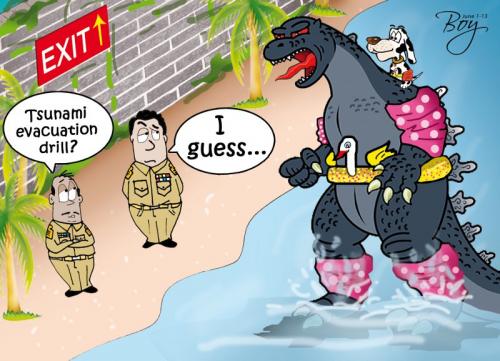 PHUKET: The construction of a wall along Kamala Beach that could be a barrier during an emergency evacuation once again highlights the need for constant vigilance and above all, common sense in the never-ending preparation for a tsunami or other natural disaster.

Few places on Phuket were hit harder than Kamala, where the bathymetry and onshore topography allowed the surging seawater to extend some two kilometers inland, destroying just about everything in its path except, in thought-provoking irony, most trees.

Sadly, other hard-hit areas with similar topography like Patong and Khao Lak in Phang Nga had also attracted some of the densest concentrations of resorts and tourist-related businesses.

With the 10-year anniversary of the disaster approaching, we can all sleep better at night knowing that a warning system is in place around the island and ready to sound, probably well in

advance, should another tsunami threaten our shoreline.

As this past week’s emergency training exercises have shown, the many agencies involved in emergency response appear better trained and equipped than they were in 2004.

This is due not only to increased awareness and better budgets, but also to hands-on training developed during the 2004 event itself and during subsequent tsunami scares, especially the one that followed the largest earthquake ever recorded in Phuket in April 2012.

That event exposed a variety of serious flaws in our preparedness mechanisms, especially the woeful inability of the state-run media to keep a panicked public informed of events in real time.

There are other weaknesses in the system.

In 2004, Karon was largely spared from inland devastation due to its large and healthy dunes. Since then, many sections of this natural barrier have been destroyed by heavy machinery working on projects authorized or carried out by the local administration. Similar situations can be found in many places on the island, where tourism-related businesses are encroaching on coastal land.

The government is rather uncreative in its evacuation exercises, which are inevitably based on a theoretical tsunami with the same causes and characteristics as the 2004 event.

If such a twin tsunami were to hit the island, it seems likely that many more lives would be saved than the first time around. However, due to a virtual tsunami of greed-driven, poorly regulated development over the past decade, property damage would probably be far greater.

But disasters are, by definition, unpredictable, and if we do not prepare for the unexpected, the results we face may be devastating.