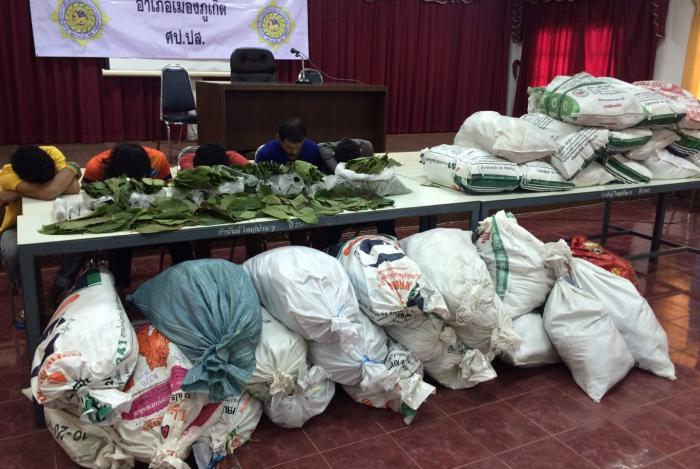 PHUKET: Five suspects were arrested with 400 kilograms of kratom leaves during a raid in Rassada last night.

Governor Chamroen Tippayapongtada revealed details of the arrests at a press conference held at the Phuket office of the Narcotics Control Board (NCB) this morning.

Samran Yukhontorn of the NCB received tips from locals about young men frequenting a rented house in Rassada. NCB officials raided the house at about 8:10pm to find numerous packages containing kratom, but nobody present inside.

“We arrested the suspects when they returned in a pick-up truck, with its trunk loaded with sacks of kratom leaves,” said Gov Chamroen.

“They confessed to transporting the kratom from Hat Yai to Phuket by bus, in order to hand it over to sellers in Phuket. They said they were getting a 35 per cent share for each shipment.”

All five suspects were charged with processing a category 5 drug with intent to sell. Police also seized the pick-up truck and two cars at the scene.