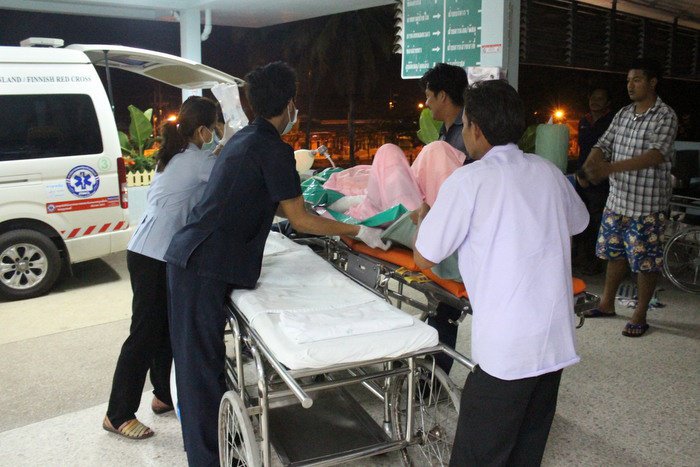 PHUKET: Seven Myanmar fishermen were seriously injured after a battery allegedly exploded, sparking a fire inside their fishing boat off the coast of Phang Nga early this morning.

One of the Myanmar nationals, whose name was withheld by hospital staff, is in the Intensive Care Unit (ICU) at Vachira Phuket Hospital after he sustained severe burns to his entire body, a hospital staffer confirmed to the Phuket Gazette.

The explosion on Phermpoonsap took place about 12 miles off the coast of Kuraburi district in Phang Nga at about 4am.

“I was sleeping inside the cabin at the time. There were seven workers sleeping in the engine room near the batteries,” said Vorawat Saengwijit, a relative of the boat owner.

“Something metal must have fallen onto one of the batteries and caused it to explode. The explosion then caused the other batteries to catch fire.

“The seven workers inside the engine room ran out with their bodies on fire and jumped into the water. We immediately called for help from nearby boats to bring the workers to hospital.”

Six of the injured crewmen were taken to hospitals in Takua Pa and Ranong, while one was taken the ICU at Vachira Hospital.

The boat owner, Anna Phandee, did not request a police investigation for the incident and has taken responsibility for all the medical costs for the injured workers, Mr Vorawat told the Gazette.

“The owner of the boat has not notified the police of the incident. We were notified by staffers at Kuraburi Hospital after they received the injured workers,” said Capt Somkid Onchun of Kuraburi Police Station.

“We believe the story about the battery exploding and causing the fire, but we want to investigate further, so we have made an appointment with the boat owner.”