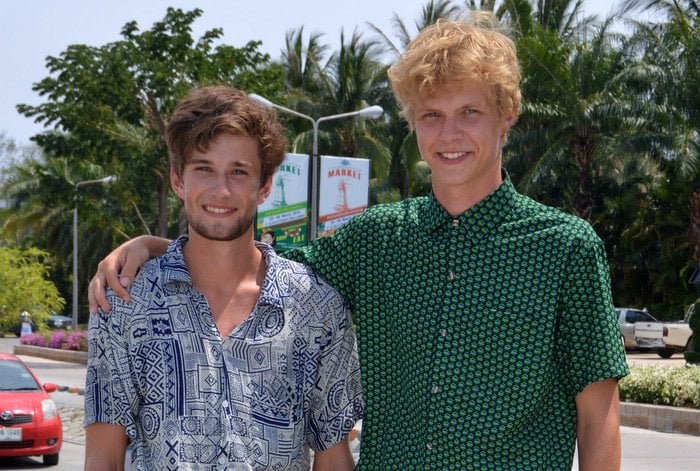 PHUKET: Marine Police are waiting at Chalong Pier for the arrival of a dive boat that allegedly hit a sailboat and fled after throwing one of the Danish crew members seeking the safety of the dive boat into the water.

“Everyone was screaming. I realized that we hit the boat, and my friend fell into the water,” 21-year-old Jens Ole Vibild, who has spent the last 14 days on the boat as part of his gap year, told the Phuket Gazette. “I jumped to the other boat, the diving boat, because I thought our boat was going to sink.”

Witnesses on the sailboat, Starship, explained that after the collision, the Aqua Center Thailand dive boat, North Star, started to drive away with Mr Vibild still on board.

“The diving boat went back because the crew realized that I was on the boat and they didn’t want me to be on the boat,” Mr Vibild said. “They kept saying, ‘jump, jump, jump’.

“I refused because I’m an okay swimmer, but it was in the open ocean and big waves and the boat was still moving, so I didn’t know if I could make it, but then he [a man yelling at him to jump] threw me into the water.”

By the time Mr Vibild was allegedly thrown into the water, his 20-year-old friend Per Boegh Ellekrog had managed to swim to safety in the dinghy being pulled behind the sailboat.

“I suddenly realized that we were going to hit, and we couldn’t avoid it. So I had my book [The Odyssey] in my hand and just backed up. I was leaning against the railing when the impact [of the collision threw] me off the boat into the water,” Mr Ellekrog said. “I was there. I had my book in my hand. I fell into the water and I was scared for my life.

“Looking up, I could see the boat moving. I was swimming as fast as I could to get to the surface.”

Once safely on the dinghy, Mr Ellegrok recalls hearing his Mr Vibild shouting his name.

“I had no idea how he got on the other boat. I was in the dinghy and I saw the dive boat just take off, and I was like, ‘Wait! My friend’,” Mr Ellegrok said. “The boat took off, but made a big turn and came back. Then, I saw him standing there, refusing to get in… He was pretty shocked, so he didn’t want to jump. I said, ‘Ole, just stay, just stay.’ Then, I just saw a guy just pushing him and I saw him screaming and falling into the water.”

The owner of Starship explained that he followed maritime protocol when he saw North Star on a collision course with his sailboat, which had right of way.

“The dive boat was coming from my right side and I wasn’t sure if he could see me or not… I maintained course and speed, which is what I’m supposed to do under the law. I was under autopilot. I wasn’t even steering the boat,” said American Gary Gilbert, who was on the boat with his wife and daughter. “He wasn’t slowing down and he wasn’t altering course. I blew my horn five blasts. Five blasts means collision warning. I gave it to him when he was 100 meters away.

“Still no change in speed and no change in direction. So I hit [the horn] again – five blasts. Then my horn started running out of air.”

At this point the dive boat responded with three horn blasts.

“I didn’t know what it means – it doesn’t mean anything in the marine world. He was less than 50 meters at this point. I jumped and ran to the helm and I released the autopilot and I tried to turn the boat. I couldn’t turn it fast enough.”

Mr Gilbert explained to the Gazette that he didn’t see the dive boat make any change in speed or direction before the collision.

“After the collision the anchor went through my mainsail and all the ropes and lines were tied around his anchor. We were connected together,” he said.

“I didn’t even notice that one of my crew members [Mr Ellegrok] went in the water. I didn’t know someone was in the water. I was trying to disconnect the ropes. He was smashing my boom, smashing the side of my boat.

“They must have stopped their engine because they weren’t pushing me anymore.”

Once the boats were disentangled, the dive boat turned and started to leave, said Mr Gilbert.

“My crew was on their boat… At that time I was trying to get control of my boat. The boom was swinging wildly in the wind and the mainsail was smashed. We were still sailing,” Mr Gilbert said.

“[The dive boat] came around and smashed the bow of my boat. It smashed me twice trying to get the crew member back on my boat.

Mr Ellegrok managed to swim to the dinghy where his compatriot Mr Vibild was waiting for him.

Along with the Marine Police, Aqua Center Thailand employees are waiting for North Star to return.

“We have cooperated with the authorities and sent all the necessary documents to the Marine Office already,” said the manager of Aqua Center Thailand, Jaruwan Pongmak. “We are now waiting for the captain to return and explain what happened.”

Marine Police Chief Panya Chaichana confirmed to the Gazette that a police complaint was filed to the Wichit Police Station concerning the incident.