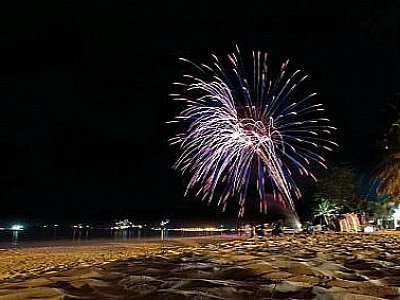 PHUKET: Winai Chidchiew, the chief of Karon Subdistrict (Kamnan), has found himself amid another corruption scandal, this time over allegedly threatening municipal officers into allowing firework displays to be held late at night, while facing allegations of paying bribes to the Chalong Police.

Kamnan Winai found himself in the center of corruption allegations involving the Chalong Police last year, when he defended illegal immigrants working illegally in Kata and Karon as staff selling counterfeit goods.

In that incident, the migrant workers accused the Chalong Police of extorting “too much” money from them, leaving them with no choice but to cease their line of trade.

This week, however, Karon Deputy Mayor Itthiporn Sangkaew accused Kamnan Winai of threatening his officers, and accused Chalong Police of accepting bribes in order to ignore complaints about the late-night displays.

“About five months ago, Club Med sent their guests to join an activity at Kata Beach Resort & Spa. Other Karon Municipality officers and myself went to the hotel to observe.

“We tried to stop guests from lighting the fireworks on the beach, but Kamnan Winai confronted us. With his team surrounding us, he told me, ‘Don’t mess with this matter’,” Deputy Mayor Itthiporn told the Phuket Gazette.

Mr Itthiphorn said that he had tried to invoke the Municipality Act , which confers the power for municipalities to act on public order issues.

However, Kamnan Winai insisted that the Muang District Office, which covers Phuket City and the southern part of the island, granted the hotel permission to stage the fireworks show.

“Although the hotels are granted permission by Muang District Office, they still have to ask for permission from Karon Municipality to use the area to set off fireworks,” retorted Mr Itthiporn.

“I tried to explain this to Kamnan Winai, but he kept saying that if the District Chief had allowed them to set off fireworks, then it was legal to do so and told us to stay out of it.

“The late-night fireworks in the Kata area were almost stamped out, but now they’re back again because some government officers have misused their authority. They’ve allowed the hotels, entertainment venues, restaurants and tour companies to start again,” he added.

“Kamnan Winai is directly involved in this issue. I heard that he has bribed Chalong Police so the police will allow him to abuse his power,” he alleged.

“We’ve tried to get rid of the problem, but our work has ground to a halt because of illegal powers at work. Now I have no idea where to start. What if we get into trouble? Who is going to help us deal with this? No one. That is why we cannot take risks and that is why we cannot move on,” explained Mr Itthiporn.

“Fireworks are set off in Kata every night from about 9pm to 2am, and it is several times almost every night. I want to make Kata a peaceful place for locals and tourists. That is what I’m aiming for,” he said.

Kamnan Winai, however, countered the accusations with allegations of his own. “Some municipality officers wanted to charge a ‘commission’ from the operator who was providing firework displays for hotels and restaurants in the Kata and Karon area for the pleasure of their guests and tourists.

“The operator did not want to give money to the officers, so he told me about the problem. I suggested he contact the Muang District Office to obtain permission to hold firework displays. He did so, and he now operates legally,” Kamnan Winai continued.

However, the Karon Municipality officers were still not satisfied, he alleged.

“Speaking frankly, they still wanted the fireworks operator to pay them,” said Kamnan Winai, adding that the officers tried to use the Municipality Act to intimidate the operator into paying them.

“How can municipal officers still try to prevent him [from staging fireworks] when he had already received permission from the District Chief. He did everything according to the law, so how can they arrest him?” asked Mr Winai.

“The municipality should respect the [District Chief’s] decision and not interfere in his business. Further, Karon Municipality officers claimed that I gave the operator a ‘special right’ or that he had offered me a bribe, which is not true,” he said.

“I am the Kamnan of Karon, so whoever is going to light fireworks in my area is my responsibility. I have to check that they have authority from the District Office. If I see anything being conducted in accordance with the law, and that does not cause any trouble to people in my area, then I will allow it. I will advise them to be careful and check the area to make sure it is safe before setting off any fireworks. This is my job,” said Kamnan Winai.

Challenging Deputy Mayor Ittiporn’s accusation of paying bribes, Kamnan Winai responded, “I have never paid a bribe to Chalong Police officers. It is the municipality officers who demanded the money from the firework operator. The firework managing operator is my friend and he told me he had been asked by municipality officers to pay a bribe,” Mr Winai alleged.

In a statement apparently aimed at Deputy Mayor Itthiporn, Kamnan Winai said, “You are a municipality officer and a representative of the government. You should have clean hands. Advise the firework operator to be careful when lighting fireworks and make sure the beach is clean afterward, but stop trying to find an excuse to arrest them.”

“If you hear fireworks after that, it’s more likely coming from the smaller bars, clubs or restaurants along the beach, or some tourists just having fun,” Kamnan Winai said.

Dragged into the affray, Chalong Police Deputy Superintendent Narong Laksanawimon told the Gazette that he knows of a conflict between Karon Municipality officers and Kamnan Winai about firework displays in Kata, but does not know the full details.

He did, however, unreservedly deny all allegations of Chalong Police officers receiving any money from Kamnan Winai.

“We have tried to control the problem and I can say that it has decreased. Previously, it was happening almost every night,” said Lt Col Narong.

“Even though it’s hard to control fireworks being set off we do not ignore it. I order police to patrol the area every night. If a person lighting the fireworks has authority from Muang District office, we cannot charge them,” he said.

Power to the Phuket people