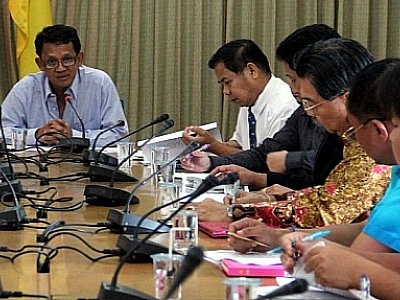 The aims of the project are to get treatment for existing drug addicts, solve family issues associated with drug addiction, and prevent people from becoming criminals to feed their drug habit, explained V/Gov Chamroen.

“The ‘X-ray every inch over a 90-day period’ campaign is a strategy formulated by the National Command Center for Combating Drugs (NCCD). In Phuket, it will start on November 1 and continue to January 31,” he added.

The strategy, to be employed throughout the Kingdom, identifies and monitors particular places which have a high number of drug related incidents.

“The offensive will involve increasing overt police patrols, installing CCTV cameras, and using [plain clothes] officers to monitor people in the community who have received drug treatment and who tend to be involved with the drugs trade,” he said.

“In Phuket, we have chosen Ban Bang Chi Lao [near the Supercheap market on Thepkrasattri Road] in Rassada; Baan Para [along the Pa Khlock-Muangmai Road] in Pa Khlok, and Baan Thung Thong [600 meters west of the Bang Wad Dam turn off],” he added.