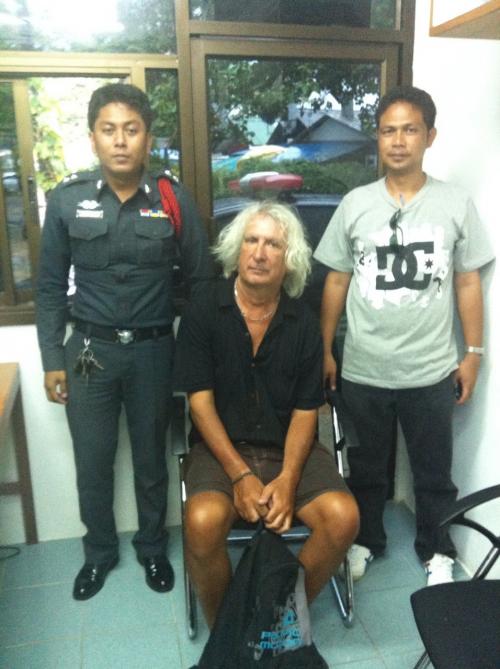 PHUKET: A French tourist, afraid his wife would be angry at him for spending too much money on holiday in Phuket, was arrested yesterday for filing a false report to police, in which he claimed he was robbed by two teenagers.

“He claimed the teenagers took 2,000 baht cash and some important official documents. He said he was robbed in front of the Siam Commercial Bank near Karon Circle [map here],” Lt Col Sophon said.

Officers dispatched to the scene questioned shop owners, tuk-tuk drivers and other people in the area – all of whom, however, said they knew nothing of the robbery.

“The officers then reviewed CCTV footage from the bank and other businesses in the area, but found no evidence to support the claim that the robbery actually took place,” Lt Col Sophon said.

“So we came back to the station and started questioning him. He finally confessed that he had spent a lot of money and was afraid his wife would be angry with him, so he reported to us that he had been robbed,” he added.

Filing false reports to police are treated seriously in Thailand.

Danish tourist Morten Berthelsen, 18, was handed a 500-baht fine and a two-year suspended jail sentence – but was luckily not deported – for filing a false report that he had been beaten and robbed (story here).

Australian Stevie Bamford, however, served two weeks’ incarceration at Phuket’s Bang Jo Detention Center in Thalang for allegedly filing a false report that she had been raped by a Patong tuk-tuk driver (story here).

Ms Bamford formally retracted her claim, but on returning to Australia re-affirmed on national television that she had been raped and criticized officials for their handling of the report (story here).

Filipino caught with 7kg of crystal meth at Phuket Airport