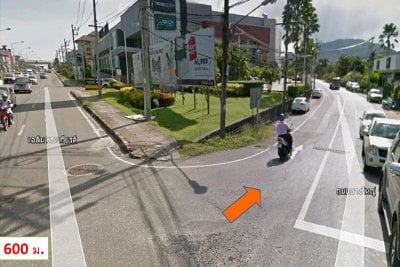 PHUKET: The Highways Department yesterday held a public meeting to suggest alternative routes for motorists to alleviate traffic congestion when construction of Phuket’s first underpass at the Darasamuth Intersection, in front of Central Festival Phuket shopping mall, begins next month.

Present were representatives from the Department of Highways’ Bureau of Bridge Construction in Bangkok, the Phuket Highways Office, and the contractor for the 600-million-baht mega-project, Thailand’s largest construction firm Italian-Thai Development PLC.

“The Darasamuth Intersection underpass [construction project] will start in the middle of this coming October [next month]. The whole project will take approximately two years, or 720 days, to complete,” explained Phuket Highways Office Director Samak Luedwonghad.

“Once this project is complete, it can solve the traffic problems for both local residents as well as tourists. The traffic flow heading to Rawai, Promthep Cape and Patong will be much better,” he added.

Mr Samak expressed serious concern about traffic congestion while the project is underway.

“We expect traffic [around the construction project] to be 20 to 30 per cent worse than it currently is. Therefore, we have come up with alternative routes to propose to the public and to ask for their opinions,” he explained.

Three alternative routes presented to the public yesterday included for southbound traffic heading toward Patong, to turn right at the Samkong Intersection, in front of the Tesco Lotus mall about one kilometer north of the underpass project, and continue on to Kathu and Patong, as most southbound traffic already does.

Alternatively, motorists would be able to continue through the Samkong Intersection and make a u-turn in front of Phuket International Hospital and then turn left into Bang Yai Road, which runs behind the Big C shopping center.

Mr Samak explained that the u-turn, which is currently for ambulance access only, would be re-opened fully to allow regular traffic to use it.

For southbound traffic heading toward Chalong, it was suggested that motorists turn left at the Tesco Lotus intersection onto Yaowarat Road, and continue right through the heart of Phuket Town.

Motorists would exit the downtown area by turning right onto Bangkok Road. From there, they would continue straight through the Slaughterhouse Intersection onto Wirat-Hongyok Road and rejoin the bypass road at the already-busy Naka Intersection about one kilometer south of Central Festival.

Several other routes were suggested for northbound traffic, including one wherein vehicles heading north on Chao Fa West Road would turn off near the Honda showroom in Wichit onto Muang Chaofah Road, which would bring the traffic into Kathu.

(Click here to see a large map of the area and suggested alternative routes.)

Mr Samak also revealed yesterday that construction of the underpass at the Samkong Intersection in front of Tesco Lotus was expected to start in April 2014.

“The bidding for the construction price and other processes should begin six months from today. The budget approved for this project is 850 million baht, but some of that budget funding will need to be spent on the Darasamuth underpass because the government did not approve the entire amount required in its initial budget approval,” Mr Samak explained.