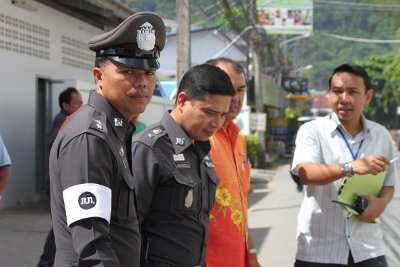 PHUKET: Phuket Police are searching for two men who carried out a knife attack on two Australian tourists last night that left one woman dead and another injured.

The attack, believed to have been a botched bag snatch attempt, occurred at Phuket’s Kata Beach, about 200 meters from the hotel where the women were staying.

Michelle Elizabeth Smith, 59, and Tammee Lee Lynn were walking back to their hotel after dinner at about 10pm when two men approached on a motorcycle, said the report by Chalong Police.

The motorbike passenger, who was not wearing a helmet, attacked the women with a knife.

Ms Smith suffered a 15-centimeter-deep stab to the chest that punctured her lung and heart.

Ms Lynn’s right arm was slashed in the attack.

Police believe the attack was a failed attempt to snatch the women’s bags. However, the two men fled the scene without taking any of the Australians’ belongings.

Injured, the two tourists were attempting to make it back to the hotel for help when they were assisted by a hotel employee who rushed both women to hospital by car.

Australian Honorary Consul to Phuket, Larry Cunningham, was at the hotel this morning along with Phuket Tourist Police officers to assist in making the arrangements.

Chalong Police have told the Phuket Gazette that they have identified the two suspects and are moving in to make arrests.

The men are to face charges of attempted robbery with the use of motorbike and using a knife as a deadly weapon, resulting in injury and death.

A police press conference is expected to be held at 2pm today.

Clarification: Since this report was posted online police have confirmed that Ms Smith died at the scene while hotel staff were trying to assist her. Ms Lynn was taken to hospital later.