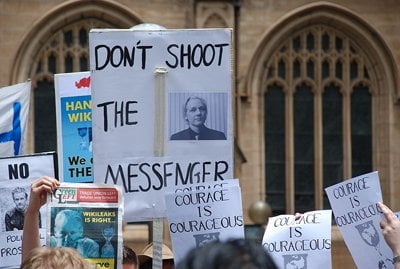 Assange had requested political asylum at Ecuador’s embassy in London on Tuesday.

Ecuador’s deputy foreign minister Marco Albuja told the Australian Broadcasting Corporation (ABC) yesterday that, “We can’t make a final decision public until tomorrow. The national government is considering its position and the president will give us his instructions tomorrow.”

In his request for political refuge, Assange told the embassy that the government of Australia – where he was born – had abandoned him and that he is being persecuted politically. He also fears being extradited to the United States, where he says he believes he could be sentenced to death if he is indicted.

“Such statements make it impossible for me to return to my home country and put me in a state of helplessness by being requested to be interrogated by the Kingdom of Sweden, where its top officials have openly attacked me, and investigated me for political crimes in the United States of America, a country where the death penalty for such offences is still in force,” Assange said in his request on Tuesday.

Ecuadorian Foreign Minister Ricardo Patiño said the government is evaluating the request and assured it will take into account the rules and principles of international law and human rights.

His country’s embassy in London says Assange will remain in the compound, under the protection of the Ecuadorian government, until a decision is made.

Yesterday morning Ecuadorian Ambassador Anna Alban met with British officials to discuss Assange’s application for asylum. “The discussions were cordial and constructive,” Alban said. “I also emphasized to the UK government that it was not the intention of the Ecuadorian government to interfere with the processes of either the UK or Swedish governments.”

Assange’s choice to seek asylum at the Ecuadorian Embassy surprised many, especially because of Ecuador’s bad record when it comes to press freedom and accusations that President Rafael Correa is leading a relentless campaign against free speech, but senior government officials have previously welcomed WikiLeaks.

In November 2010, then-deputy foreign minister Kintto Lucas invited Assange to visit Ecuador and offered him residency. “We are open to giving him residency in Ecuador, without any problem and without any conditions,” he said at the time, although the Ecuadorian government later said Lucas was speaking on his personal behalf.

Nonetheless, Correa voiced his support for WikiLeaks in a recent interview with Assange for his TV series ‘World Tomorrow’. “We have nothing to hide. If anything, the WikiLeaks have made us stronger, as the main accusations made…were due to our excessive nationalism and defense of the sovereignty of the Ecuadorian government,” he said.

Correa added: “On the other hand, many WikiLeaks cables spoke about the interests in the national media about the power groups who go to seek help, to foster relationships with foreign embassies, and benefit from the embassy’s contacts. Here we fear absolutely nothing. Let them publish everything they have about the Ecuadorian Government.”

Also yesterday Scotland Yard said Assange has breached one of his bail conditions and will be arrested once he leaves the embassy compound. “As Mr Assange is in the Ecuadorean embassy he is in diplomatic territory and beyond the reach of the police,” Britain’s foreign office said in a statement. Police officers could be seen waiting outside the embassy compound.

Assange has been fighting extradition from Britain to Sweden where he faces allegations of sexual molestation, unlawful coercion and rape. A London court dismissed Assange’s appeal in November 2011 and the UK Supreme Court earlier this month rejected his bid to reopen the case.

The accusations are unrelated to Assange’s work for WikiLeaks which brought diplomatic earthquakes to the United States when it began releasing classified American documents that it had obtained. Assange has claimed the cases have been politically-linked, arguing that the sexual encounters with the two women in Sweden were consensual.

WikiLeaks’ first big scoop was on April 5, 2010, when it released a classified video which showed a 2007 U.S. helicopter attack in Iraq which left several civilians killed, including two unarmed Reuters journalists. Assange previously said he had been told to expect ”dirty tricks” from the Pentagon, including ”sex traps” to ruin his reputation.