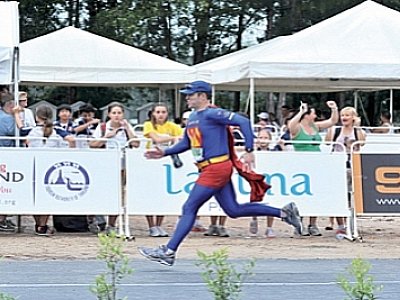 The event, sponsored by the Phuket Gazette, was divided into five categories: the grueling full marathon of 42 kilometers; the half marathon of 21km; the 10.5km run; the 5km community walk and a 2km children’s run.

Participants ranged from as young as 16 years to some who can claim the title of octogenarian.

One couple, Somsak Kaiswong and his wife Yindee, 78 and 73 respectively, have completed over 80 marathons between them.

Some participants wore costumes, the most prominent of which was Trent Morrow’s. Also known as ‘Marathon Man’, Morrow is an Australian who travels the world participating in these events while wearing his skin tight blue and yellow suit, replete with flowing red cape.

The LPIM marked Morrow’s 50th marathon and the Sydney Superhero was overjoyed at the experience.

“I loved it”, he said. “I really did. I’ve been doing this since 2008. Each event is unique and offers something different in its own right, but this [race] will always be my 50th and I’m over the moon.”

Morrow races for charity and raises funds for poverty-stricken children in countries in Africa. He is a true superhero, but insists that he is just one person of many who are doing great work.

“Look around you. Look how many people are getting involved. People from all over the world and that is why running is such a great sport. It doesn’t cost anything. All you need is a destination and few friends.”

Muangkod led the line for the 5km walk and was full of praise for the event.

“It really was a great success. To see so many children in particular turn out for the race and walk was heart-warming,” she said.

Danchai Pankong was the first to cross the finish line in the full marathon at a time of 2 hours 49 minutes.

Pankong, although exhausted, was elated by his achievement.

“I am just happy it’s over” he said, clearly tired but grinning from ear to ear.

“I just kept telling myself to keep going and that the training will pay off at the finish line.”

Klaus Brachetti, a German citizen who participated in the 21km run said he was overwhelmed by the sense of camaraderie at the event.

“That’s what it’s all about, isn’t it? I finished near the back, but had such a great time and the smiles all around are why we all came.”

For a full list of race results go to phuketmarathon.com.