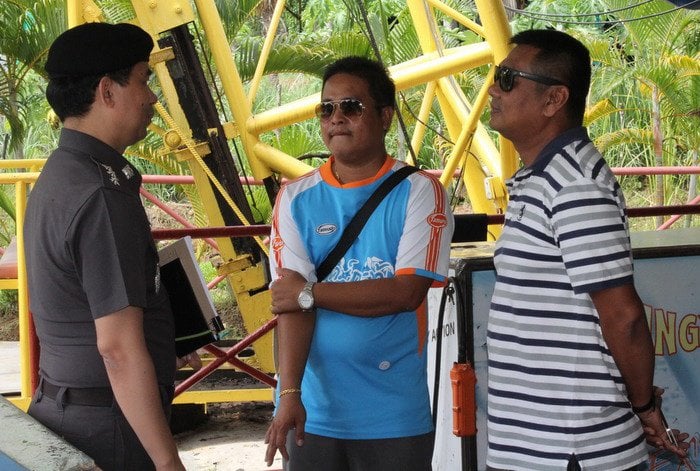 PHUKET: World Bungy Jump in Patong has been temporarily closed while officials investigate the death of a 25-year-old tourist who was fatally injured at the facility on Wednesday.

“The business will be closed for at least a month while police determine if this was an accident or reckless endangerment on the part of the bungy-jump owner,” explained Patong Mayor Chalermluck Kebsup.

Abdullah Adel Kadhmbadman was rushed to Patong Hospital after hitting the ground from his jump off the 30-meter tower at the facility. He died shortly after arriving (story here).

Employee Manoon Ninmin, who was at the scene at the time of the accident, explained that the incident happened on Mr Kadhmbadman’s second jump.

“The first jump went very well. However, the during second jump, which was from 30 meters, the incident occurred,” Mr Manoon said.

From the initial investigation, police believe that the wire securing Mr Kadhmbadman’s feet during the jump broke.

However, charges have yet to be pressed, as the evidence was sent to Bangkok to be analyzed. Police expect it to take one or two months to get the results back.

“Due to this business being more than a decade old, it will take time to collect and check all documentation. Additionally, we’ll have to review the evidence in order to decide whether or not the incident was an accident or if it was a result of reckless endangerment,” Ms Chalermluck told Phuket Gazette yesterday.

Only recently have new regulations been implemented that require businesses such as World Bungy Jump to register their equipment with the local authorities, Kathu District Chief Sayan Chanachaiwong explained.

“We need time to check and see if everything was up to standard,” Mr Sayan said.

“We have been in this business for 13 years and have never had an incident like this. We are very sorry for this accident and are ready to take responsibility for our role in it.”