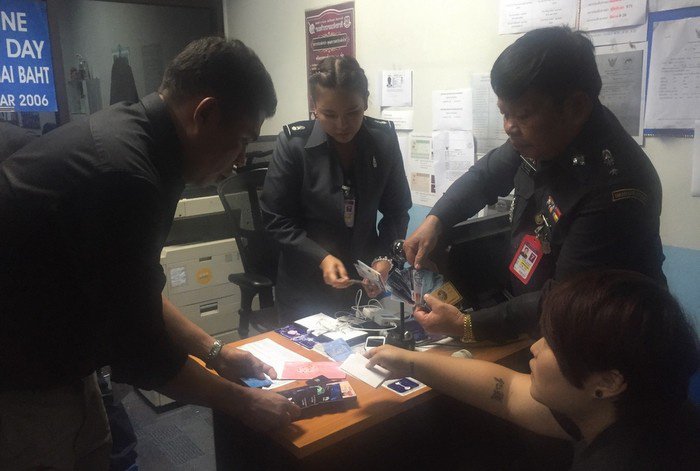 PHUKET: Police arrested a confessed credit card scammer as she waited to board a plane back to Malaysia at Phuket International Airport on Wednesday.

Koo Ping Sze, 20, was taken into custody after police received a report from Kasikornbank (KBank) that she had used a fake credit card to make a purchase in Patong.

“Kbank identified that the cardholder was a Malaysian national, but that the card details were for a US citizen,” explained Phuket Provincial Police Deputy Superintendent Prawit Engchuan.

At the boarding gate for the AirAsia 9:40pm flight to Malaysia, police caught up with Ms Sze. In her possession they found a total of 17 fake credit cards – all issued in her name – one boarding pass and her passport.

“Ms Sze was waiting to board her plane when we arrived. She allowed us to search her belongings, and confessed to being in possession of fake credit cards and using them,” Col Prawit said.

“She told us that she got the cards from a credit card skimming network in Malaysia in order to have a shopping spree abroad. She had used the cards to buy brand name items in Vietnam, before her visit to Phuket.”

Ms Sze’s family is expected to arrive in Phuket today. She will be taken from the Tah Chat Chai Police Station to the courthouse tomorrow, confirmed Col Prawit.

Phuket Airport possible base for US military support