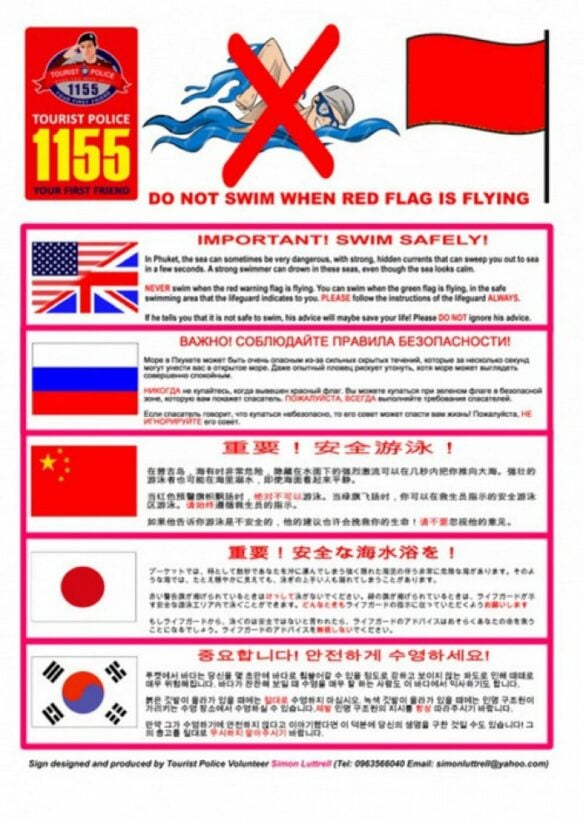 “Now that all beaches have lifeguards again, I wanted to check that they all had my cards to help warn foreign tourists about the unseen dangers of rip currents, and to heed the advice of the lifeguards at all times,” Mr Luttrell explained.

The cards were designed to assist the lifeguards in communicating with foreign tourists about the meaning of the red flags – ‘no swimming – dangerous’ – and the importance of heeding lifeguards’ warnings. The laminated A4-sized cards, printed in English, Russian, Chinese, Japanese and Korean, allow lifeguards to clearly communicate surf dangers to tourists who are unable to understand English, or who believe they are stronger than the rip currents (story here).

Mr Luttrell pointed out that he paid mother-tongue translators to write the warnings in each language, to ensure that the advice would be fully understood.

“It was very encouraging to make an unannounced visit to the beaches and see lifeguards patrolling with my cards in hand,” Mr Luttrell told the Phuket Gazette last week. “I visited Ya Nui Beach, Nai Harn Beach, Kata Noi Beach, Kata Beach and Karon Beach, and was able to replenish the lifeguard stations with advice cards. In some cases, the cards had been damaged by constant use, while some smaller lifeguards stations did not receive cards last time.”

The cards were designed, printed, laminated and distributed by Mr Luttrell – all of which was paid for out of his own pocket. Each A4 card costs Simon about 80 baht to print and laminate.

“I handed out 14 cards this morning and will soon hand out about another 20 cards for Patong Beach, Kamala Beach and the northern beaches,” he said last week.

Mr Luttrell is a volunteer police officer at Phuket International Airport and also owns several small hotels in the area. He has taken on the role of assisting the lifeguards with tourist advice cards because, in his own words:

“If I don’t do this, I don’t really know who else will. It is very important that all Phuketians – Thai and non-Thai, locals and expats – help to assist and inform our foreign tourists, so that they can have a pleasant and trouble-free holiday, and thus recommend Phuket to their friends and colleagues.”

The lifeguard-warning cards follow suit in Mr Luttrell’s “Have a Happy Holiday” cards, which highlight six dangers for tourists to be aware of during their stay in Phuket.

“These cards are featured in the lobbies of most of the hotels in my region: the airport, Mai Khao and Nai Yang,” he said.

The cards, in English, Chinese and Russian warn of: 1) Rip tides and beach flag colors; 2) Pickpockets; 3) Jet-skis; 4) Riding motorbikes; 5) Respect for the environment and cultural sensitivities; and 6) Attire when away from the beach.

“Several hotels have asked for the jpeg file for this card so that they can print them and place this advice card in all of their guest rooms,” Mr Luttrell noted.

Mr Luttrell invited all people who work with or regularly encounter tourists about to enter Phuket’s surf to contact him for free cards at 096-356 6040.