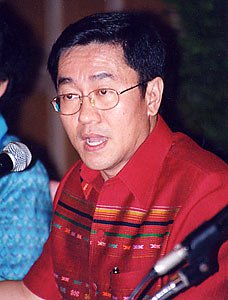 PHUKET TOWN: In a bid to make Phuket more attractive as a Cyber Paradise, the Ministry of Information and Communication Technology (ICT) is pushing for visas and work permits to be processed in one day for “knowledge workers”. Dr Surapong Suebwonglee, Minister for ICT, announced after a seminar in Phuket yesterday, “We will push for work permits and visas to be issued in one day in order to attract ‘knowledge workers’ from abroad to come and develop the ICT industry here. “We expect to have 3,000 foreign ‘knowledge workers’ coming to work here each year.” He also revealed other plans for the island, including: • A boost for Phuket’s telecommunications by combining the networks of the Communications Authority of Thailand (CAT) and the Telephone Organization of Thailand. CAT will also set up a gateway connecting the island direct to the outside world, instead of via Bangkok. The cost of this is estimated at 100 million baht. • The establishment of a Phuket ICT Learning Consortium to help academic institutes better cooperate. • The development of E-services. Dr Surapong said, “We expect to offer E-services to people around the end of this year through Internet communication, and through one-stop service at local government offices.” Phuket will also be used as the testbed for plans to issue smart cards for people to use in dealings with government departments. • The establishment of a software park with discounted telecommunications services. The Phuket provincial government is expected to complete its Cyber Paradise plan within a month and submit it to the ICT Ministry. The plan will then be placed before the Cabinet for approval. Within three months an office of the Software Industry Promotion Agency will be set up in Phuket to help develop the software industry and telecommunications on the island, and to act as a one-stop service center for knowledge workers coming to Phuket. The seminar, held at the Pearl Hotel, attracted 120 government officials and private sector representatives.