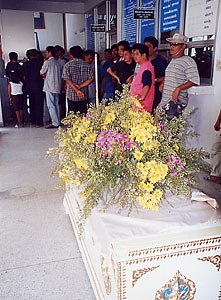 CHERNG TALAY: About 200 Cherng Talay villagers carried the casket of a murdered village council member to the Cherng Talay Police Station yesterday to demand justice for his death. The victim, 33-year-old Sommit Kongtin, was allegedly clubbed to death by a gang of young thugs outside the Chok E-sarn Karaoke Bar on Srisoonthorn Rd at about 2 am on June 10. K. Sommit had been a respected member of the local community and was well-known for his efforts to rid the area of drugs and other vices. He was a member of Cherng Talay’s village council. Friends and family members were outraged that it took police one hour to respond to the call for help from the owner of the karaoke bar, which is just one kilometer from the police station. Arriving at the station with K. Sommit’s corpse at about 12:30 pm yesterday, they were finally given a letter by Pol Lt Col Sirisak Wasasiri, Deputy Superintendent of Cherng Talay Police Station, who promised to resign in one month if he was unable to track down the killers. Satisfied with this pledge, the protesters then carried the victim’s casket to Wat Anamai Kasem for cremation at about 3 pm. Sommai Kongtin, the victim’s 30-year-old brother, told the Gazette his brother was a beloved member of the local community who volunteered in anti-drug efforts and other local projects. He added that his brother was killed by a gang of six, ranging from 16 to 22 years of age. “We want to see progress in this case because there have been many similar violent attacks in this area in which the police have been unable to catch the perpetrators,” he said. Col Sirisak told the Gazette that police had already taken one 16-year-old suspect into custody on charges of conspiracy to commit murder. He is now being held at the Phuket Juvenile Observation and Protection Center. Police believe the other gang members have left Phuket, and that the murder occurred when a drunken argument turned violent.

Fast visas and permits for IT experts