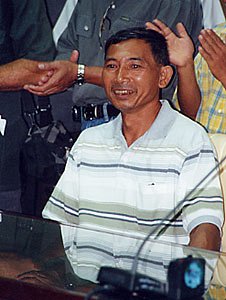 PHUKET TOWN: More than 200 villagers gathered this morning to complain to Phuket Governer CEO Pongpayome Vasaputi about land problems. The Provincial Administration Organization building was jammed with villagers, including farmers, planters and representatives of many communities who complained that, following the SorPorKor investigation, their land had been declared as encroaching on forest preserve areas – the so-called Zone C land. Uthai Suksirisamphan, former chairman of a committee looking into farmers’ complaints, pointed out that the Ministerial Orders establishing the various pieces of Zone C land came after the farmers were already on the land. The government, he said, had announced that it was going to revoke papers to land that villagers can prove they occupied before the Nakkerd and Kamala hills were declared Zone C areas in 1967 and 1969 respectively. Some 35 years ago, K. Uthai said, officials had told people they must move off the Zone C land, but this did not mean they had to do so immediately. They were entitled to submit an objection within 30 days of the eviction order, and in 1,476 cases, people did so. Sumeth Waandee, one of the villagers at the meeting, said that he had a son and a daughter, both still in school. He had been granted four rai of SorPorKor land in Kamala. “I have only one piece of land and now it will be revoked because they say it’s in a forest preserve,” he said. “I make some money from selling rubber on the land. I also have to work in the construction industry to get more money. In total I earn about 3,000 baht a month. This is the life of a Nai Hua (influential person)? A total of 16 Ministerial Orders were issued between 1958 and 1985, designating as forest preserves a total of 105,809 rai in Phuket. Seven of these preserves cover mangrove forests, while the remainder cover tropical forest. Gov Pongpayome told the meeting that he could affirm that real farmers and planters would not be affected by the land probe. If there were mistakes, he would most definitely push for justice on their behalf. “If farmers have SorPorKor land that has been targeted for revocation because the land is in, or overlaps with, Zone C forest, the Phuket government will ask the relevant authorities to help solve their problems,” he said. He added that the provincial government would pass on people’s opinions to the Interior Minister and to the Minister of Agriculture. K. Uthai said that Deputy Minister of Agriculture Newin Chidchob should apologize to villagers “in order to show his good leadership”. “I’d like him to admit that he didn’t know what he was talking about when he referred to Phuket people who received SorPorKor land. He should stop talking now.” K. Uthai issued a warning that the farmers might use the upcoming Asia-Pacific Economic Cooperation (Apec) meeting in Phuket as an occasion to demonstrate against the mishandling of the SorPorKor probe. “I can’t guarantee that we will not come to ask for justice when the Apec meeting is on,” K. Uthai said. “It’s up to K. Newin whether we do or not. “My demands are that K. Newin stop criticizing and set up one more committee to check SorPorKor land that people occupied before the forest conservation announcement.”

“Illegal’ restaurant to be demolished