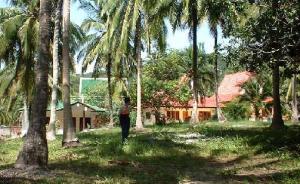 KALIM: A top police general today said a well-known restaurant just north of Patong occupies SorPorKor 4-01 land, and will have to be knocked down. The commissioner of the Central Investigation Bureau, Pol Lt Gen Chatt Kuldiloke was in Phuket to check on the land investigation work done by his officers, and visited the restaurant, the Suangsawan (Sunset Point Restaurant & Cocktail Bar), which is on the hill to the north of Kalim Beach. Police said that the restaurant belongs to Bangead Chaisith and occupies two SorPorKor plots totaling about 30 rai. The restaurant, along with bungalows for rent to tourists, occupy one plot. On the other plot, police said, K. Bangead was building two small houses. It also held an elephant corral with housing for mahouts, along with five houses for rent. He said that the owner would be evicted because he is not a farmer, because non-agricultural buildings had been constructed on the land, and because part of the land was being rented out without permission. He added that the Supreme Court had ordered the land vacated in November, 1997, but the occupier had failed to comply. “They derive no income from agriculture, but are using SorPorKor land for other purposes. We will force them to dismantle all the structures and return the land to the public,” Gen Chatt added. The general also visited a site close to the sea in the Tri Trang area, south of Patong, which he identified as being a SorPorKor plot of 18 rai, occupied by Somphop Piromrit. The land contains several shophouses – two of them occupied by the offices of Phuket Webs Travel & Tour and a motorbike rental company – and two houses for rent. “We have already contacted the occupier of this place and asked him to meet us to answer questions about the land,” Gen Chatt said. Meanwhile, in Bangkok, The Nation reports that the Agricultural Land Reform Committee (ALRC) will revoke SorPorKor 4-01 papers covering more than 2,000 rai in Phuket. Once the papers have been rescinded, occupiers will have 30 days to vacate the land or face prosecution, the paper quoted ALRC chairman, Deputy Agriculture Minister Newin Chidchob, as saying. Of the 2,432 rai, 606 rai will be allocated to genuine farmers, while the remainder will be returned to the stewardship of the Forestry Department.