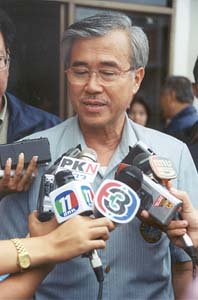 PHUKET: In Phuket to attend a meeting of Democrat Party leaders at the Phuket Merlin Hotel on Saturday, Party Leader Banyat Banthadtan told the Gazette his visit was intended to show support and encouragement for Phuket residents targeted by the government in its ongoing investigation into land rights on the island. K. Banyat said he wanted to tell those under investigation not to be unduly intimidated because the the matter would ultimately be decided in the courts. He also accused the Government of using the issue as part of a “marketing campaign” to win political influence in the region. When asked if he thought Phuket was being singled out for political reasons, the recently-elected Democrat leader replied, “I don’t think I even have to answer that [question]. Is this the only province with a [land title] problem? When will they investigate other provinces, like Phang Nga , Krabi and Surat? There is only one place they’re focusing on, and that’s here [Phuket]. “Still, they have to file charges in court, and we can see from many past verdicts that people were not ordered off the land, nor did they have their [land] rights revoked. “It’s ugly. I think this is a real low-point of this government, the way it selectively chooses its targets. And the language used by one Government Minister was ugly too, branding anyone who has bought [disputed] land as ‘receivers of stolen goods’. “How is this possible? We have laws that specify what constitutes receiving stolen goods [and courts to decide who is guilty]. It’s all about gaining political advantage, which we are used to, because we have seen it all before,” he added. K. Banyat stressed the need for any government land probe to be straightforward and conducted according to the law. When asked about the Democrats’ chances in the South in the next parliamentary elections, K. Banyat said that the party still had strong support in the South, its traditional power base. He said he was still confident in the party’s strength in Phuket in particular, adding that several trips to the island by Government figures had yet to produce any tangible results.