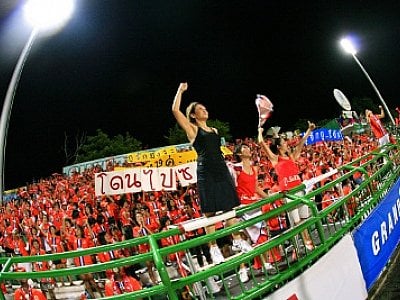 PHUKET: Sompong Wattana from Rajvithee FC will be the new coach of FC Phuket.

The news was released at 5pm today, ahead of a scheduled sanctioned press release tomorrow.

A fourth straight game without a win for FC Phuket incensed the team’s distraught fans yesterday and led to a blockade of Surakul Stadium by angry fans, known as the “Hulks”.

Supporters jeered the players and screamed their displeasure by calling for Coach Surachai Jirasirichote to quit.

Shortly after the game against Buriram FC, Surachai tendered his resignation and left the club.

Buriram traveled with a huge number of supporters who were supremely vocal and very well organized.

It took 36 minutes of play before the deadlock was broken when Buriram’s Chakrit Rawanprakhon superbly controlled a long pass from the left side of midfield, receiving it five meters outside FC Phuket’s penalty area.

Pushing the ball onto his left foot, Chakrit curled his shot towards the left post.

FC Phuket’s goalkeeper could only stand and watch as the ball glanced off a retreating defender and then the upright and into the net for Buriram’s opening goal.

The visitors doubled their advantage in the 67th minute when another searching cross, this time from the right, was awkwardly cleared skyward by Nene Bi Tre Sylvestre.

Deft control of the descending ball allowed a Buriram forward to showboat his close control with four touches and an overhead kick.

His shot was bravely charged-down, but the loose ball was volleyed home by Somjed Satthaboot following in from the right edge of the penalty box.

Four minutes of added time were played, but spectators were offered some last minute drama just before the full-time whistle.

FC Phuket goalkeeper Theerawat Pinpradub was deemed to have obstructed Buriram’s Olivier Ndjoua, for which the referee awarded a penalty.

It was clear from the goalkeeper’s refusal to take his place in the goal and the obvious flying boot of Ndjoua that the decision should have gone to FC Phuket.

Rattapol Piyawutsakul sent the disgruntled goalkeeper the wrong way with his strike high to his left, which ended the contest 3-0 to Buriram FC.

The drama was not to end there for FC Phuket, as the crowd bayed disapproval of their team’s dreadful run of form.

Surachai faced FC Phuket supporters at the end of the match and indicated in his address to the crowd that his resignation was not a reaction to this recent defeat.

“I would like to announce my resignation as coach [of FC Phuket]. I feel it is my responsibility to step down and I would like to thank all the fans as well as team management who have supported me all along.

“In reality, I have considered resigning since our 2-2 draw with Samut Prakan Customs United, but a coach was still needed while team management found a replacement.

“However, in light of the pressure I have received, I can no longer delay my decision,” he said.

The game will kick off at 6pm on June 5.

Phuket ‘3G fishermen’ saved by call from the wild