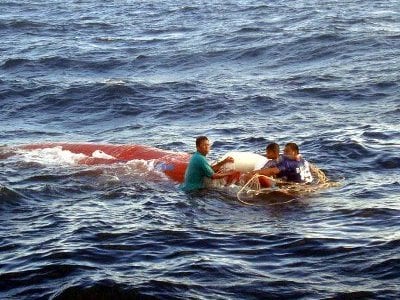 PHUKET: Three men, comprising three generations of a fishing family, were rescued from their capsized boat 17 nautical miles off Phuket’s east coast yesterday thanks to a mobile phone kept in a waterproof bag.

The men – Somboon Sae-Oui, 56, his son Pichet, 28, and eight-year-old grandson Bhumin – survived two hours clinging to their upturned boat while it was lashed by waves up to three meters high.

The trio were fishing near the popular dive site Shark Point when their five-meter boat turned turtle about 3:45pm.

“When I pulled myself together, I got my phone from the waterproof bag and called my wife,” he added.

Vice Admiral Choomnoom Ardwong received the report at 4pm and immediately dispatched a rescue boat, which recovered the men about 90 minutes later.

“The three fishermen were returned safely to port at the Phuket Marine Biological Center at Cape Panwa at 6:50pm,” said Lt Nattawut Tulapan, captain of the rescue vessel.

“It was so lucky that we brought the waterproof bag. It saved our lives,” Mr Pichet said.

He also expressed his gratitude to V/Adm Choomnoom, who strongly suggested the fishermen check weather forecasts before heading out to sea again.