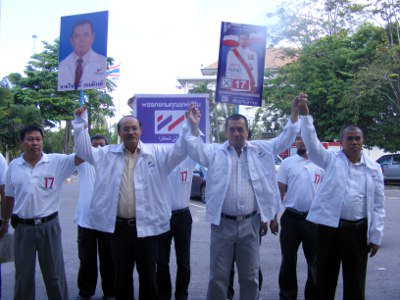 PHUKET: Two more people on Saturday signed up as candidates to contest the Phuket 1 constituency in the July 3 national election.

The last-minute registrations came on the last day the Phuket Election Commission would accept applications for candidacy.

In the morning, Weerasak “Ko Sak” Woranetiwong registered as a candidate representing the Thaen Khun Phaendin Party, which is listed as party number 17 on the Party List ballot.

Jatupong Lertsiljirada of the Chart Pattana Puea Pandin Party, which is number “2” on Party List ballot, registered his candidacy in the afternoon.

Unlike when the candidates of the major parties registered, when scores of people turned out in support, this time only a handful of supporters gathered at Provincial Hall to cheer on Mr Weerasak and Mr Jatupong.

“I would like to be an alternative for people who are not happy with any of the major parties,” Mr Weerasak said.

“I have always been interested in political issues. Even getting just some votes would make me happy,” Mr Jatupong said.

He once ran as a candidate for Phang Nga in the senatorial elections in 1999, he added.

The two registrations on Saturday brings the total number of people contesting Phuket seats to seven candidates from five parties.

They are as follows:

Raywat Areerob of the Democrat Party (10)