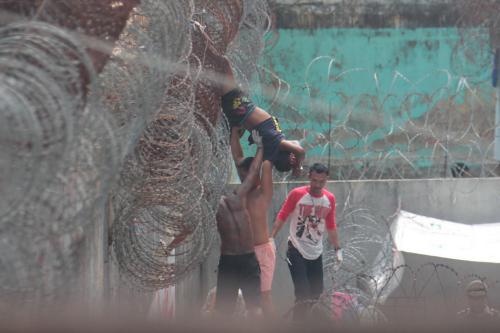 PHUKET: An attempted jailbreak from Phuket Prison came to a shocking halt at 12:30pm today when an inmate trying to escape was electrified by wires strung across the top of one of the perimeter walls.

Alerted to the escape attempt, prison guards scrambled to the east wall, where they found Worawut Rordbhut, 45, unconscious, hanging upside down with his left leg tangled in barbed wire.

Rescue workers were quickly called to the facility to safely bring Mr Worawut back to ground, with help from other inmates. It took 30 minutes to extract Mr Worawut from his plight.

“We believe he was attempting to break out because he was very homesick, as that is what he told our guards before his attempt today,” said Phuket Prison Chief Rapin Nichanon.

Mr Worawut was sentenced to 2 years and 6 months in jail for a theft conviction on March 29 last year.

“That sentence was compounded by another theft conviction that saw 1 year and 9 months added to his sentence. He is currently on trial for two more cases of theft,” Chief Rapin explained.

Mr Worawut was taken to Vachira Phuket Hospital for treatment of burns and cuts sustained in his bid for freedom.

“He will now be charged with attempting to escape from prison,” Chief Rapin confirmed.