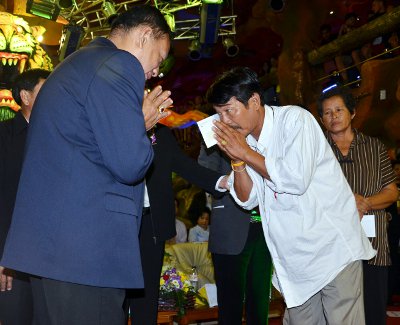 PHUKET: Families of the two Thai victims killed in the Tiger Discotheque fire on August 17 accepted compensation cheques of 1 million baht each during a ceremony in Phuket yesterday.

The handover ceremony at the Tiger Live Band venue in Patong, not far down Bangla Road from the gutted disco, was shown live on Thai TV Channel 7 as part of a boxing match broadcast.

The cheque presentations were made made by Tiger Group CEO Piya Isaramalai. Attending and serving as witnesses to the compensation package were Phuket Governor Tri Augkaradacha and Government spokesman Prompong Nopparit of the Pheu Thai Party.

Booncherd Budkror, father of the late Duangporn Budkror, told the Phuket Gazette, “Duangporn was the eldest of my four children. I am still mourning the loss of my daughter, but I have to accept it.”

“Crying won’t change anything. I am thankful for all the support we have received and I would like to say thank you to Tiger Group for not abandoning the families of the victims,” he said.

“We will go to pick up Duangporn’s body at Police Institute of Forensic Medicine in Bangkok and then head back home to Prachin Buri Province for her funeral,” he said.

The other recipient was Mrs Somboon Sudtasorn, mother of the late Nipaphat Sudtasorn. She accepted the check and left quietly with her relatives, declining to comment to the media.

At a meeting with Tiger Group representatives at Patong Police Station on Wednesday, Mrs Somboon initially refused to accept one million baht in compensation for the death of her daughter because she still has two children in school, Tiger Group General Manager Sema Sinchai told the Gazette.

Mr Sema said after that meeting that Tiger Group was prepared to provide one million baht compensation immediately, without having to wait for the case to go to court.

It is not clear why Mrs Somboon changed her mind and accepted the compensation.

“The discussion with the Thai families went well, but we have yet to meet the families of the two foreigners [who died in the Tiger Discotheque fire]. We are waiting for them to approach us,” Mr Sema said on Wednesday.

At yesterdays’ ceremony Mr Piya told the media, “I wish to thank everyone for giving my team the moral support needed to move the Tiger Group forward”.