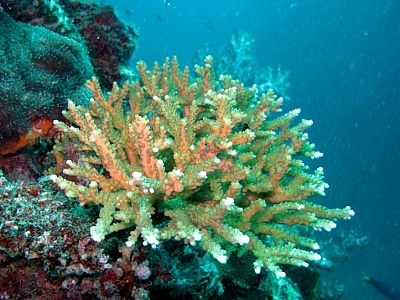 PHUKET: With coral reef systems in Thai coastal waters at a “crisis” level, the director of the Phuket Marine Biological Center (PMBC) has vowed to step up his department’s efforts to mitigate the damage caused by the fishing industry and other human factors.

“Currently, our natural coral reefs are not half of what they used to be – we are in a crisis,” said PMBC director Pinsak Suraswadi on Tuesday.

“The areas that have been most seriously affected are those that are regularly exposed to human activity, such as off tourist destinations along the coast,” he added.

Though the entire region is in trouble, the Gulf of Thailand is at greater risk than the Andaman coast, he said.

“Abundant and beautiful coral reefs are now only found in national parks, such as the Surin Island and Similan Island reserves. In these places the coral is still world class.”

“Closing National Parks has definitely been helpful in giving the corals time to recover from the pressure humans exert on the ecosystem,” he said, in reference to the annual closure from May through November.

The PMBC is attempting to prevent damage to coral reefs caused by the fishing industry through a variety of programs. One such program, established in Songkhla, involves the purchase of used fishing equipment in order to discourage fisherman from throwing rubbish, such as old netting, into the sea, he explained.

“Everyone can get involved in preserving our marine environment; it’s not just the responsibility of the government. Changes made in our daily lives, such as using less soap and fewer plastic bags, can really make a difference,” he said.

Mr Pinsak also made a push for the establishment of more artificial reefs in order to reduce the pressure on natural reef systems.

“It will reduce the effect the diving tourism industry has on the natural reefs. Artificial reefs, such as scuttled ships, will provide new diving destinations,” he said.

Mr Pinsak pointed out that the PMBC had recently become involved with the “Green Fins Project”, which encourages tourists to wear life jackets and keep their feet away from corals when snorkeling.

“Also, we ask tourists not to chase turtles in order to photograph them or feed marine animals,” he added.

Mr Pinsak made it clear that coordination and cooperation between all those concerned was necessary to prevent further degradation.