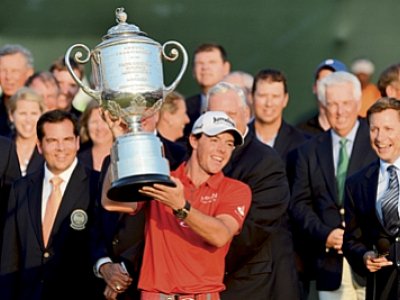 PHUKET: The last Major on this year’s PGA Tour golfing calendar, the PGA Championship, was played at the Ocean Course Kiawah Island South Carolina, one of the most difficult courses in the world.

Before the tournament started, Kiawah Island had heavy thunder storms, similar to the weather in Phuket presently.

As all the world’s top professionals gathered, including newly crowned Open Champion winner Ernie Els, the weather seemed to calm, leaving a much more manageable course.

On day one with wet conditions and little wind, players were able to take aim at pins on greens that usually are not as easy to hold and first round scoring was low. Carl Petterson led the way on 66.

Day two the weather began to make play a bit more interesting. With the wind getting its tail up and blowing some shots off the golf course, the average score on the day moved all the way to a staggering six over par.

Those who managed a bit better and were now leading at 4-under-par and included Tiger Woods, Carl Petterson and VJ Singh, with Rory McIlroy two shots behind.

The third day was disrupted by the weather, which caused the round to be suspended until the following day.

Once play was resumed twenty hours later, Tiger Woods was one of the big movers. Would this be his break through effort of the year and 15th Major victory? Quite simply, his third round score of 74 had him moving in the wrong direction on the leader board and created an opening for some other big names.

Carl Petterson’s 72 kept him at 4-under; Rory McIlroy fared much better putting distance between himself and the field with a solid 67 to lead at 7-under-par.

The final round was unusually teed-off from both the 1st and 10th, due to the extension of the third round into Sunday. Ian Poulter made a great start with 5 birdies in a row to move to 6-under-par.

Carl Petterson got to 6-under as well, but faded on the back nine for a final 72. Rory McIlroy was out in 33 and 10-under with nine holes to play.

Poulter faltered over the next few holes and eventually finished tied for third place. The stage was set for Rory after putting a birdie on the 12th.

It looked like Mcllroy was playing with the boys at his home club on a Sunday afternoon, calm collected, and having a lot of fun. With two more birdies on the back nine and an error free 66 on the day, the young Irishman seemed to be playing in his own tournament – seemingly not effected by weather or pressure.

A fourth round total of 13-under-par to win, and 8 shots better than anyone else was enough to set a new record winning margin at this historic event.

McIlroy, 23, is now the youngest winner of two Majors and the first UK winner of the PGA Championship since Tommy Armour in 1930.

It seems noteworthy, for those of us who enjoy this game so much, to point out that after turning pro at the age of 16 with a handicap of plus 6, McIlroy has never really changed his swing mechanics.

In fact, if you look at video when he was very young, he doesn’t look like he has changed his golf swing since the age of 3.

What I like most about McIlroy’s swing, is that he seems to create tremendous power without looking like he is working all that hard. To me Tiger Woods seems like he is now working harder than ever, each swing looks difficult not only to repeat but also difficult on his body.

Remember power and consistency in golf start with perfect balance and timing and not brute force. Keep your golf swing simple and fluid, as the expression goes, “the golf swing should be two turns with a swish in the middle”. Weighing only 74 kilos, Mcllroy is the perfect example of power deriving from timing and balance.

Poll: Should Phuket be exempted from election-day alcohol bans?