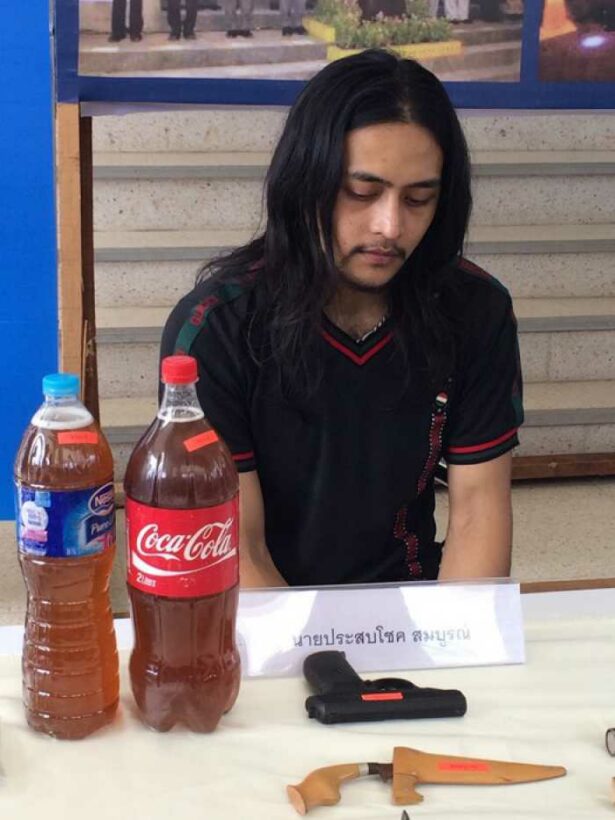 PHUKET: A man who appeared in photos and video clips on Facebook threatening two people with a gun in Phuket on Saturday has been arrested on drug charges.

Prasopchok Somboon, 29, from Phang Nga, was caught on camera by people in passing cars intimidating a man and a woman with the gun near the Chinese shrine at the top of Patong Hill.

When police arrived on the scene, the suspect had already fled.

“According to witnesses, Mr Prasopchok, who was driving a white pick-up truck, got into an argument with a man and woman in another car after they tried to pass Mr Prasopchok on the hill,” Patong Police Deputy Superintendent Akanit Danpitaksat told the Phuket Gazette.

Mr Prasopchok then pulled over and got out of his pick-up. He was seen brandishing the gun and threatening the other man with it, who had also stopped his car, Lt Col Akanit said.

“The woman then began to plead with Mr Prasopchok not to hurt them, and he fled after the other man threatened to call the police,” he said.

Witnesses told police that the suspect was seen heading toward Patong.

“We sent a police unit after Mr Prasopchok and found him with his truck, which was parked on Phisit Gorani Road,” Col Akanit said.

“Police searched the truck and discovered an imitation gun, a knife and two bottles of a tea brewed from kratom leaves.”

Col Akanit said Mr Prasopchok would be charged with possession of a Category 5 drug, but no gun charges would be pressed against him, as no complaint had been filed.

“Because no complaint as been filed with us, we cannot charge him for intimidating these people with the threat of a firearm,” Col Akanit explained.

Mr Prasopchok is being held at Patong Police Station pending a court hearing.