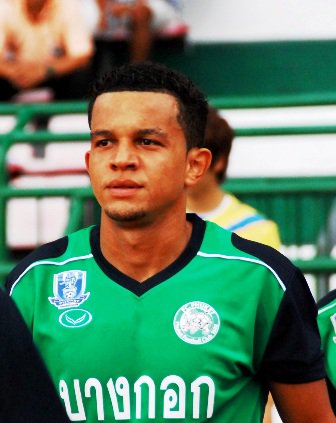 PHUKET: FC Phuket bagged their first victory of the TPL Yamaha Division One League season against the Korat FC “Swat Cats” in a heated away match last night in Nakhon Ratchasima province.

The only goal came on 29 minutes when K-league import Kim Wonsup’s corner was met by Watcharapong Jun-ngam’s glancing downward header that beat Korat’s keeper Narong Wisetsri at the near post.

Going into last night’s encounter in Isaan, Phuket were placed 12th in the league, while their opponents and Division 1 newcomers, Korat were in fifth place on four points from one win and one draw.

Brazilian midfielder Marcio Santos was finally able to debut for Phuket now that his transfer papers from the Myanmar league have been processed.

Before the match, FC Phuket Coach Milos Joksic said: “I am very happy that I will have him in this game. We needed him for the last two matches. His talent will certainly benefit the team.”

Joksic also remarked before the match that he wanted his team to play faster, attacking football with greater teamwork. With three points in the bank, his tactics are, for the moment, working.

Remarkably, two red cards were dished out during injury time. The first came in the fifth minute of injury time when Phuket’s Suwit Najumroen was sent off for a second bookable offense after his innocuous obstruction was dramatized by his opponent.

A minute later, Korat’s goalkeeper Narong Wisetsri was also dismissed following a professional foul on Wonsup, who had put the ball past Narong and was clean through on an open goal when he was boldly body-checked by the keeper.

A victorious Phuket move up to seventh place while Korat plunge to 11th in the table.

After beating Krabi 2-0, Songhla top the table with seven points. Equal on points, but behind on goal difference is Pattalung in second place, who drew with Suphanburi FC 0-0. Krabi’s loss to Songkhla moves them down to 12th in the league.

On Sunday, Krabi FC will host JW Rangsit at Krabi Provincial Stadium at 4pm, while Pattalung welcome Sri Racha Suzuki FC for a 6pm start. Songkhla will travel to Rayong to take on PTT Rayong with a 6pm kick off for that game also.

Phuket will also play on April 1 at Surakul Stadium against Bangkok United. Kick off will again be at 4pm.