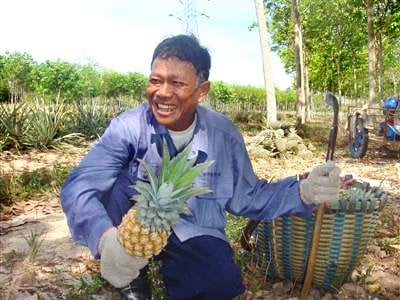 PHUKET: Phuket residents planning a weekend road trip to Bangkok might want to start the journey today, as thousands of pineapple farmers in Prachuap Khiri Khan have announced they will stage a full road blockage on Phetkasem Highway tomorrow.

The farmers, about 7,800 of them, said they will block a key stretch of Southern Thailand’s main north-south artery – and stay there and until the government agrees to allocate 800 million baht to buy their surfeit of pineapples at four baht per kilogram.

The timing of the protest follows the announcement by bulk dealers and canned pineapple factories that they would stop buying pineapples from farmers from today onwards.

The thousands of pineapple farmers in Prachuap Khiri Khan, who produce roughly 100,000 tons of the fruit annually, would be adversely affected. As such, they have decided to highlight their plight through public protest.

They plan to block the four lanes of Phetkasem Highway at Ban Nong Hin Intersection in Tambon Khlong Wan.