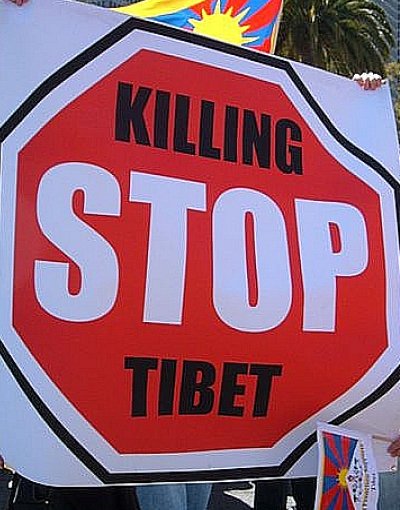 PHUKET: A Tibetan man died early yesterday morning after setting himself on fire earlier this week in New Delhi to protest against Chinese rule in Tibet, activists and officials said. He is the latest Tibetan to self-immolate in a series of similar protests.

Jamphel Yeshi, 27, from the Kham Tawu region in Tibet, set himself on fire on Monday afternoon in front of hundreds of Tibetans who had converged in New Delhi to protest against Chinese President Hu Jintao’s visit to India. He suffered 98 percent burns to his body, and doctors had given him no chance of survival.

According to the Tibetan Youth Congress (TYC), Yeshi was pronounced dead at 7:30am local time yesterday. A senior doctor at New Delhi’s Ram Manohar Lohia (RML) Hospital, where Yeshi had been taken to receive treatment, said the protester suffered a cardiac arrest related to the self-immolation

“Martyr Jamphel Yeshi’s sacrifice will be written in golden letters in the annals of our freedom struggle,” said TYC Vice President Dhondup Lhadar, who was by Yeshi’s side when he passed away. “He will live on to inspire and encourage the future generations of Tibetans. The brilliant radiance of his fire will dispel the darkness of China’s illegal occupation of Tibet and regenerate the spirit of Tibetan independence.”

Yeshi had been living in the old camp of Majnu Ka Tila in Delhi for the past two years after escaping Tibet to India in 2006 to study at the Tibetan Transit School in Dharamsala, which has been the seat of the Tibetan Government-in-exile since a failed uprising against Chinese rule in Tibet in 1960.

Lhadar said the body of Yeshi, who had actively participated in many political activities in recent years, will be carried to the Tibetan Government-in-exile’s headquarters in Dharamsala for a funeral. “Pawo Jamphel Yeshi’s self-immolation marks a milestone in our freedom struggle where Tibetans inside and outside of Tibet stand ever united in our fight against the Chinese occupying forces,” he said.

Since March 2011, a total of 30 Tibetans have set themselves on fire as part of protests taking place in Tibet, leading to the arrests of hundreds of Tibetans by Chinese security forces. As a result of the unrest, Chinese authorities have stepped up security in the region.

PHUKET: Hundreds of women are currently imprisoned in Afghanistan for so-called ‘moral crimes’, including running away from forced marriages and extra-marital sex charges after being raped, according to a report released by Human Rights Watch (HRW) yesterday.

The 120-page report is based on 58 interviews conducted in three prisons and three juvenile detention facilities with women and girls accused of moral crimes. The human rights organization estimates that more than 400 women, nearly all girls in juvenile detention and about half of women in prisons, were arrested for moral crimes.

“It is shocking that 10 years after the overthrow of the Taliban, women and girls are still imprisoned for running away from domestic violence or forced marriage,” said Kenneth Roth, executive director of Human Rights Watch. “No one should be locked up for fleeing a dangerous situation even if it’s at home. President Karzai and Afghanistan’s allies should act decisively to end this abusive and discriminatory practice.”

Moral crimes usually involve flight from unlawful forced marriage or domestic violence by abusive husbands and relatives, the human rights group said. Some women and girls have been convicted of zina, sex outside of marriage, after being raped or forced into prostitution. Some of the victims were arrested after they went to police in hopes of getting help.

Women and girls interviewed by Human Rights Watch described abuses including forced and underage marriage, beatings, stabbings, burnings, rapes, forced prostitution, kidnapping, and murder threats. Virtually none of the cases have led even to an investigation of the abuse, let alone prosecution or punishment.

Most women accused of moral crimes are arrested solely on a complaint of a husband or relative, and prosecutors usually ignore evidence that supports their assertions of innocence. Judges often convict solely on the basis of ‘confessions’ given in the absence of lawyers and ‘signed’ without having been read to women who cannot read or write.

Police, prosecutors, and judges also ignore evidence of abuse against accused women, despite the 2009 Law on the Elimination of Violence Against Women which makes violence against women a criminal offense. “Courts send women to prison for dubious ‘crimes’ while the real criminals – their abusers – walk free,” Roth said. “Even the most horrific abuses suffered by women seem to elicit nothing more than a shrug from prosecutors, despite laws criminalizing violence against women.”

The report said that Karzai’s government has failed to fulfill its obligations and called on the U.S. and other donor countries to press Karzai to end the wrongful imprisonment of women who are victims rather than criminals. “It is long past time for Afghanistan to act on its promises to overhaul laws that make Afghan women second-class citizens,” Roth said. “Laws that force women to endure abuse by denying them the right to divorce are not only outdated but cruel.”

Despite the fall of the Taliban more than a decade ago, violence and abuse of women continues to be a serious problem in Afghanistan. Human rights activists have repeatedly criticized Afghan authorities for their failure to protect women, and the issue was highlighted again by three recent cases.

In January, a 30-year-old woman from Kunduz province was choked to death by her husband and mother-in-law after she gave birth to the couple’s third girl late last year. “She was told by her husband that if she delivered another baby girl, he would kill her,” a police spokesman said at the time. The mother-in-law was arrested, but the husband was able to escape.

In December 2011, police in northern Afghanistan rescued a 15-year-old girl who had been locked up in a toilet for about half a year and was frequently beaten for refusing to have sex with men brought home by her parents-in-law. The young victim had earlier married a 30-year-old man, a common practice in a country where some girls are being married as young as nine-years-old.

Prior to that, the Afghan government received a storm of criticism when a 21-year-old woman, identified only as Gulnaz, was arrested on charges of adultery when she reported that she had been raped by her cousin’s husband in 2009. She initially did not report the sexual assault but was forced to do so after showing signs of pregnancy.

Refusing to marry her alleged attacker to have the case dropped, Gulnaz was sentenced to two years in prison on the charge of having sex outside of marriage because prosecutors argued they could not determine whether they had sex voluntarily outside of marriage or if she was raped.

The initial sentence was later increased to twelve years in prison when Gulnaz appealed her conviction. Another appeal saw her sentence being reduced to three years imprisonment, but she received a pardon from President Hamid Karzai when the issue gained internationa