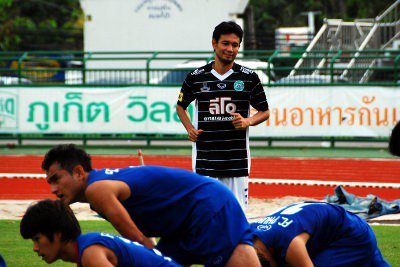 PHUKET: FC PHUKET have named defender Suphat “James” Aonthong as player-coach for their last Division 1 league match on Saturday, an away fixture against Chainat FC.

Traveling by road, the team left Phuket yesterday at 4pm and arrived in Chainat at 6am today and are scheduled for a 5pm training session at Khao Plong Stadium.

Without a dedicated coach to direct the game from the sidelines, the 34-year-old Suphat will deputize for Coach Apichart “Mo” Mosika, whose contract concluded at the end of Phuket’s last home game.

Club stalwart Suphat said, “I will coach the team for this match. I have played with the team since it started three years ago and with my age and experience, I hope I can bring out as much potential as possible from the players we have now.”

He also said, “We have fewer players to use for this game because contracts have already ended. I will decide after training this evening who will be the starting 11 for this match.”

The two foreign players in the Phuket squad now are Abdoul Coulibaly and Nenebi Tre Sylvestre.

Remarkably, both Phuket and Chainat have the same number of defeats (10), the difference being Phuket’s record of 12 drawn games compared with Chainat’s three.

Had Phuket converted a few extra drawn games into victories, their season’s fortunes may have seen them in the top flight.

The match tomorrow will kick off at Khao Plong Stadium at 3:30pm and will be broadcast live on True Visions channel 74.