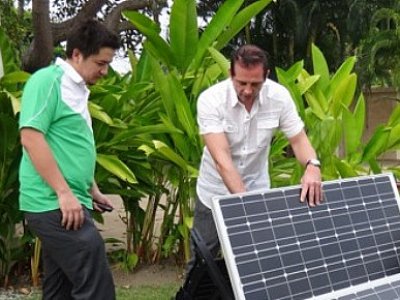 PHUKET: Trade in Phuket flourished in 2011, while prospects for new investment and ground-breaking, eco-friendly innovation on the island are looking quite good in the year ahead.

The latest 2011-2012 import-export figures released by the Phuket Customs House indicate that the island’s economy continued to grow over the past several years – mostly thanks to one viable yet heated commodity.

Although agricultural items dominated export receipts, the island’s demand for imported luxury is showing no sign of letting up any time soon.

Meanwhile, in light of rising energy costs, an innovative and affordable new solar power system that promises increased power yields of as much as 20% is set to make its world premiere to the Phuket market in the coming months.

Speaking exclusively with the Phuket Gazette, Belgian inventor and engineer Ivan Peeters revealed high aspirations for the local economy and “green market”, as he unveils his invention.

To read about this new innovation as well as a comprehensive breakdown of Phuket’s 2011-2012 import and export statistics, see the Business section in the print edition of the Phuket Gazette, which arrived on newsstands throughout the island today.

Phuket Business: Dot Com rise and fall on the way