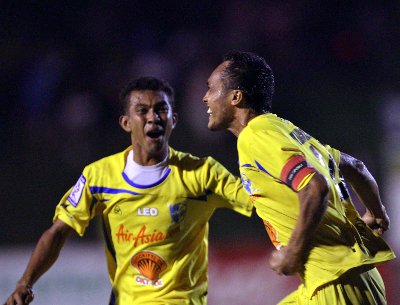 PHUKET: Krabi FC will join FC Phuket in Thai Premier League Division 1 next season thanks to a last-minute goal in a do-or-die match against promotion contenders Rayong FC last night.

In front of a standing-room-only crowd at Krabi Provincial Stadium last night, the Andaman Eagle’s equalizer came only moments after Rayong FC scored the game’s first goal – at 89 minutes.

What appeared to be the coup de grace came on a perfectly weighted goal line shot from Tinnapop Srisatit, whose celebrations concluded with him prostrating himself in front of a sizable contingent of Rayong supporters.

Had the score remained 1-0 to the referee’s final whistle, Rayong would have redeemed their failed campaign for promotion last year, while Krabi would have had to start from scratch again next year in the Division 2 southern region league.

However, the home crowd’s ‘silence of defeat’, coupled with the visiting stand’s victory celebrations, were premature.

But even as scores of grim-faced Krabi fans were filing out to beat traffic, Krabi mounted an intense and sustained attack. After three corner kicks they were finally rewarded with a goal deflected off the head of Thaweephong Charoenroob and finished off by Ghana import Bernard Linford.

Phuket saw leads slip away twice in the first half, during which all the match goals were scored. Poramut Krongborisut drew first blood in the 23rd minute. This was answered 10 minutes later by Thai Honda’s Suntin Anukool.

Niran Panthong scored in the 38th minute to put FC Phuket up 2-1, but Suntin struck again just four minutes later. The score remained 2-2 to the end of the match.

With only two matches remaining, the draw was not enough for Thai Honda to escape relegation.

The three other relegation spots are still undecided, with RBAC, Chiangmai, Customs Samutprakan, Bangkok FC, Air Force United, CT Chanthaburi, Suphanburi and JW Rangsit among the sides that cold find themselves in Division 2 next season.

The season season will conclude in a few weeks time.

Other than Krabi, Nakhon Ratchasima FC and Ratchaburi FC will also be promoted to Division One. The final promotion spot will be decided tonight, when the Pattalung Swiftlets host Kasetsart FC at 6pm.

A win by Pattalung would make them the fourth southern team in Division 1 next season. A loss could open the door from fellow Group A rivals Pitsanulok FC or Loei City.