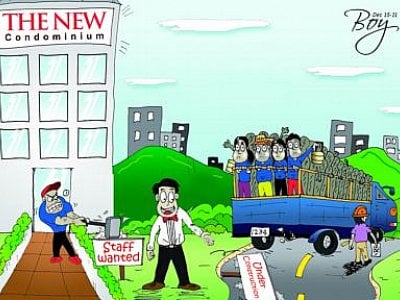 PHUKET: Government assistance to help solve the chronic “labor shortage” in the island’s tourism industry is unlikely to have much impact this high season, given Phuket’s reputation as an expensive place to live. (See page 11, current issue of the Phuket Gazette. Digital subscribers click here to download the full issue.)

A scan of the comments in popular online forums such as the Gazette Online and ThaiVisa.com makes it clear that certain sectors of the expatriate community spend a great deal of time simply whimpering over the “high cost” of living here. This is despite the fact that many, if not the majority, of the the whingers chose to relocate here precisely because Phuket offers such an attractive quality of life at such a reasonable price.

We recognize of course that the cost of living in Phuket is higher than most other parts of the Kingdom, but that is largely because the island has so much more to offer. One does not find Walmart prices at Harrods.

The odious practice of race-based pricing aside, Phuket is still an inexpensive place to live when compared with other multi-market (mass-to-luxury) holiday destinations abroad. Indeed, hotel rates here are about 30 per cent less than in rival destinations due to oversupply, a situation expected to endure for several years to come.

And for resident foreigners, of course, the marginally higher cost of living here as opposed to, say Srisakat, is easily mitigated if one is savvy enough to stay away from tourist-oriented ripoffs, to learn a bit of the local language, and to eat in local Thai restaurants.

But when we speak of foreigners we must remember that not all are voluntarily ‘expatriate’. The Burmese laborers, who do the toughest work here, have next to nothing to do to mitigate their ‘lifestyle’ expenses.

Based on the current minimum daily wage of 221 baht, these laborers can pocket no more than 6,600 baht (US$ 220) a month. How they manage to survive, and in some cases even raise families, is a testament to their mettle and resourcefulness.

Unfortunately, they, along with the Cambodians and Laotians, are currently restricted by law from all but the most menial of jobs, such as those at the bottom of the construction, fishing and rubber industries. Nevertheless, as is traditional in Thailand, untold thousands of them are already working quite visibly in tourism-related jobs to mitigate the “labor shortage” in that industry.

Most speak workable Thai, while many have English-language skills.

In order to keep as many Thais employed as possible, current labor law has as its principle tenet that foreigners are allowed to work only in jobs that Thais are either “unwilling” or “unable” to do. “Unwilling” is the key word, and business, particularly tourism, abhors a vacuum.

Would it not be time for the government to consider making legal that which already exists? Perhaps in combination with a significant, though less radical, increase in the minimum wage?