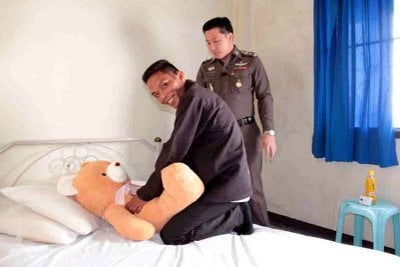 Nong Pin’s mother Samruay Saenthaweesuk told the Phuket Gazette this morning she has yet to receive any leads regarding her daughter’s whereabouts and continues to fear she might have been abducted by someone she met online while using the popular social networking website Facebook.

The possibility of such predation was confirmed by reports yesterday from Nakhon Sri Thammarat where 37-year-old Phuket resident Wimol Srida was arrested for raping three young teenage girls he met on Facebook. The youngest was just 13.

Wimol, a security guard at an unnamed Phuket hotel, allegedly lied to his Facebook friends that he worked with security operations in the Deep South. Once he gained their trust he drove to a hotel in Nakhon Sri Thammarat to meet them.

The suspect said yesterday that he had sex with only two girls, and that it was consensual in both cases.

In a re-enactment of one of the rapes at a hotel in Nakhon Sri Thammarat’s Muang District, Wimol used a teddy bear in place of one of the girls to show how the claimed consensual sex took place.

He also showed where he placed his telephone on a nearby stool to record video clips, which he would then threaten to release if the girls reported what had happened.

However, Mr Wimol insisted that he never forced the girls to do anything against their will. In one case, the girl asked him for sex, as well as gifts including an iPhone, Blackberry and cash, he claimed.

Following the reports of Wimol’s arrest yesterday, Nong Pin’s mother Samruay repeated her plea for anyone with information that may help locate her daughter to call Mrs Samruay at 087-284 8380 or Phuket City Police Station at 076-212115.