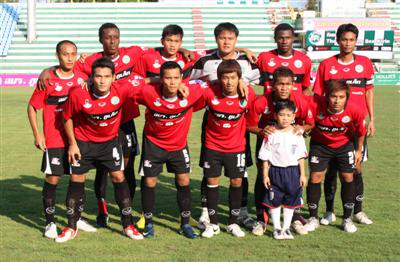 Nakhon Sri Thammarat went into the Sunday afternoon match hoping for a repeat of last year’s success, when they beat Phuket FC 4-3.

It was not to be. Strengthened by the return of Ivory Coast midfielder Ali Diarra and the arrival of Thailand under-19 international Adisak, the new-look FC Phuket Sea Kirin are now beginning to show real signs of promise after lackluster draws in their first two matches of the season.

The Sea Kirin dominated the match from start to finish. Ali Diarra provided some much needed steel in the middle and his inclusion meant that playmaker Japan, absent due to sickness, was hardly missed.

The teenage Adisak, on loan from Muang Thong Utd, justified his manager’s faith in him when he twisted acrobatically to head in a cross from an improbable angle in the 30th minute.

FC Phuket appeared destined to head into the interval with a one goal lead, but the referee stunned the home supporters by awarding a penalty to Nakhon Sri Thammarat in added time for an innocuous challenge in the FC Phuket penalty area.

The visitors seized the opportunity to tie the score as they headed into halftime.

As the second half started, it was clear the loss of the lead was not going to deter a raucous home crowd from supporting the team. There were also a large number of Nakhon Sri Thammarat supporters in the stadium.

FC Phuket continued to dominate play in the second half, but were unable to regain any of their first half fluidity and failed to find the back of the net.

Another disappointing draw at Surakul Stadium appeared imminent until the 85th minute, when Adisak calmly sidestepped the keeper to convert a perfectly placed cross.

With minutes remaining, Nakhon Si Thammarat responded by throwing men forward in search of an equalizer. FC Phuket quickly capitalized with a counterattack that culminated with an easy goal by substitute Nitirol.

FC Phuket Coach Arjhan Songgamsub was delighted with the performance, especially the impact of the new signing.

“Adisak did very well and I was pleased with him scoring two goals in his debut. Nakhon Sri Thammarat beat Chumphon last week, but we were much better than them today and I am happy that we were able to finally win a home game in Phuket,” he said.

FC Phuket are away to Chumphon next weekend. The next home fixture, a showdown with league leaders Satun Utd, takes place on March 13.