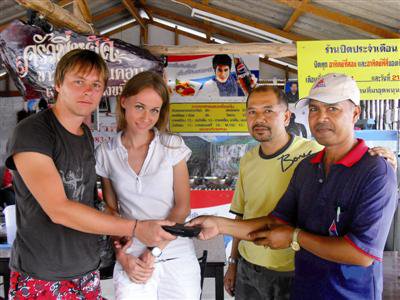 PATONG, PHUKET: A tuk-tuk driver last week returned a lost wallet to a Russian couple on holiday in Patong.

At about 2pm on February 26, sharp-eyed Seree Yodthueng noticed the wallet in the back of an unmanned tuk-tuk belonging to a fellow member of the Patong Taxi Federation. The tuk-tuk was parked along Phang Muang Road, behind Jungceylon.

The wallet contained 5,540 baht in cash, credit cards, an ATM card and an undisclosed amount of foreign currency.

Rather than pocket the cash, the honest Mr Seree reported the find to Prayat Nopparat, manager of the taxi stand, which is run by the Pisona Tour group.

Using his walkie-talkie, Mr Prayat notified all drivers under his command and told them to be on the lookout for a foreign tourist in search of a missing wallet.

At about 3pm, 30-year-old Russian tourist Tetenin Alexanden arrived with his wife at a tuk-tuk stand in front of Jungceylon asking if anyone had seen his wallet. Drivers there told the couple it was in safe keeping at the taxi stand behind the shopping mall.

Mr Alexanden said he was impressed with the driver’s honesty and never thought he would see his wallet again.

The couple’s search for the purse included just about everywhere they had been that day: the hotel they were staying in, a restaurant in Jungceylon and a beach chair rental operation.

Mr Tetenin rewarded the driver with 500 baht for his good deed.

“I returned [the wallet] because it is a part of my service. This will be very good both for my image and that of my organization,” said Mr Seree, age 48.

The Patong Taxi Federation was established on February 8 in order to clean up the negative image of many, if not most, of Patong’s taxi and tuk-tuk drivers.

The Federation also hopes to improve traffic flow in Patong by establishing a central body that will oversee the movement of taxis, tuk-tuks and motorcycle taxis in the municipality.

Phuket to benefit from continuation of stimulus package