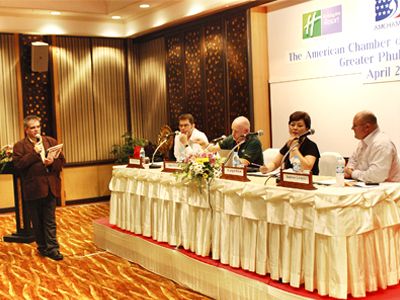 PHUKET: The Phuket property market, though not yet back to the boom years, is staging a slow but steady recovery and is perceived to be offering better growth prospects than competing resort-based markets in the region.

That, at least, was the conclusion of a panel of experts at a seminar in Phuket late last month.

The meeting, organized by the Phuket Chapter of the American Chamber of Commerce (AMCHAM) of Thailand, in cooperation with Property Report South East Asia, explored current trends and the outlook in each of the five key markets – Phuket, Bali, Samui, Pattaya and Hua Hin.

The Phuket market continues to do well, especially on the West Coast, with more property transactions taking place in the first quarter this year than in the same period last year, Mr Simister said.

The profile of typical buyers is changing, however, with more Russian and Indian investors entering the market, he noted.

Investment in the Bali market, often touted as a competitor to Phuket, is only about half the current investment in Phuket, he noted. Cambodia, which has the best foreign ownership structure in the region, may be the next “sweet spot”, he said.

“If you’re new [to property investment], buy in Cambodia in the next 10 years,” Mr Simister said.

“Pattaya is not what you thought it was. It’s becoming an international city,” he said.

The arrival of the Central Festival shopping mall has attracted a new type of tourist, including many domestic tourists, particularly from Greater Bangkok. He expects Pattaya to further develop as a shopping destination, he said.

Duangjai Kraus of Engel & Völkers spoke of property investment in Hua Hin, which she said was restricted due to high land costs. The limited amount of beachfront area and entertainment were factors in the higher price tags for premium properties, she said.

Andrew Langdon of Jones Lang LaSalle spoke about the hotel market in Thailand.

His company has been behind the sale of several major hotels in Phuket, including the Dusit Thani Laguna Phuket and the Laguna Beach Resort Phuket.

Phuket and Bangkok are driving the Thai hotel market and Chiang Mai is no longer a player, he said.

Thailand bottomed out in terms of hotel transaction volume in 2009, but is bouncing back strongly with 2011 volumes already greater than all of 2010.

Asian investors were responsible for virtually all new hotel investments in Asia in 2010, and were also emerging as major players in the international market.

“Well located resorts in Thailand in established resort destinations such as Phuket and Koh Samui continue to attract serious investor interest,” he said.