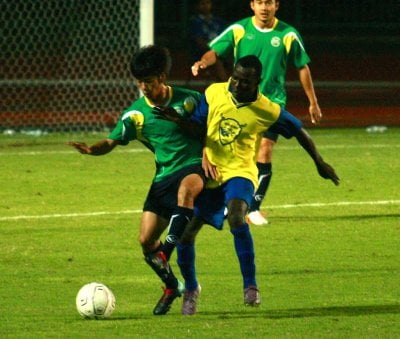 The new-look FC Phuket side, freshly promoted to Thai League Division 1, dominated play in a match that ended 3-1 in Phuket’s favor.

In the other first-round fixture, Phang Nga defeated Surat Thani 2-0.

It was Surat who went on the attack first, probing the Phang Nga defense but failing to make headway.

But in the 28th minute, Phang Nga opened the scoring with a beautiful goal by Sophon Patthako. Surat Thani were unable to level the score and by half-time the match remained at 1-0.

Soon after the second half opened, Phang Nga made it 2-0 when Ronnarong “Aek” Thongsong knocked one in.

The hotly contested game saw Phang Nga player Tessa Sebastian sent off for a wild tackle. Despite being down one man, Phang Nga managed to keep Surat from finding the back of the net.

But it was FC Phuket’s battle against Krabi that the home crowd came to see.

Phuket’s ‘Southern Sea Kirin’, who open their campaign in Thai League Division 1 on February 12, have made a number of changes following the departure of several key players.

Shortly after kick-off it was the visitors who went on the offensive first, keeping play inside FC Phuket’s half.

The home crowd’s worries were swept aside in the 17th minute when new Brazilian signing Reneto hit a thundering ball off the left post and into the Krabi goal, putting FC Phuket ahead.

As half-time approached the scoreline looked likely to stay level until Wirajroj Chanteng, recently snatched from Pattaya United, put the Kirin ahead 2-1 in the 45th minute.

In the second half, Krabi fought to stay in the game but the visitors’ frustration was clear and they gave away a number of free kicks to an increasingly confident FC Phuket.

In the 83rd minute, that frustration resulted in a foul on Reneto eight meters inside the box. The Brazilian put the penalty away effortlessly to bring the game to 3-1.

The tournament continues at Surakul Stadium in Phuket Town tomorrow.

Chinese New Year to usher in billion-baht boost for Phuket